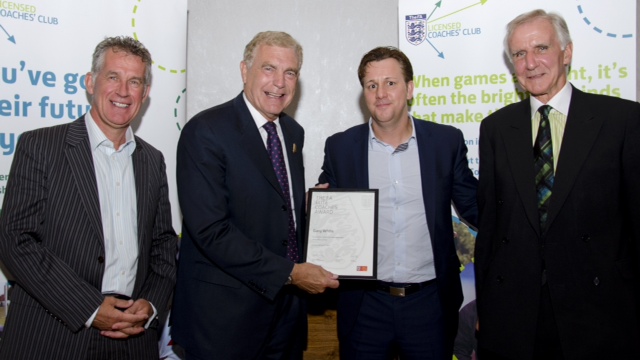 White, who also is the Guam Football Association technical director, was among 15 other English UEFA “A” License holders hand selected for the two-year inaugural coaching course in 2011, a level five qualification, the highest level in The FA and UEFA. Within the two years, he successfully completed the rigorous course criteria and received his framed license from Sir Trevor Brooking, the FA director of football development at its national football center, St. George’s Park in Burton.

“We are very proud of Gary’s coaching achievement, as only 15 other coaches in the world can claim the same level of qualification,” said Richard Lai, president of Guam Football Association. “Gary has already tailored a football program that has lifted the island’s national team to its best results. We’re excited to see what more he can add, through his top-level coaching experience, to push Guam’s success even further.”

The two-year course required White to observe and analyze professional teams and modern coaching methods around the world, among other course requirements. White made an astonishing 16 long haul international flights that added up to over 260 hours of flying time during the two years. The course was under the tutelage of top-level coaches including mentor and world-renowned top FIFA and UEFA pro license instructor Dick Bate, who is currently academy director of Cardiff City FC. Cardiff City FC will compete in the English Premier League this season. Bate was also the former FA Elite Coaching Director before accepting his current position at the English Premier League club.

“Of course, I’m elated to receive this prestigious license and be a member of the inaugural alumnus of this pro license level accreditation,” White said. “It truly was an advanced and rigorous course that is not for the faint-hearted. This course and its curriculum really has prepared me to coach and manage at the highest levels of the game. The past two years required a tremendous amount of organization, discipline and a true passion for the sport and for coaching; Richard Lai and the entire GFA support has been fantastic and I could not have successfully passed the course without them. I am proud to say that the oldest and most respected Football Association coaching licensing program now officially considers me to be elite, but in no way will my thirst to continue to learn and develop diminish. I will definitely utilize what I’ve learned to continue to improve Guam’s National football program.”

White joined GFA in February 2012 and under his men’s team program, the Matao achieved its first-ever wins against Macau and Chinese Taipei in FIFA international competitions. Guam defeated Macau 3-0 in the East Asian Cup preliminary competition to qualify for the tournament’s semifinal round and again defeated Macau with the same score line at the 2012 Philippines Football Peace Cup. Earlier this year, Guam defeated Chinese Taipei for the first time, blanking its opponent 3-0 at the AFC Challenge Cup Group A qualifier in Yangon, Myanmar. Additionally, in only a few months under White, the Matao achieved its highest ever world ranking at No. 178.

In order to sustain the island’s success, White designed and implemented the GFA National Academy for elite youth soccer players. White also created the GFA National Coaching & Education program and the GFA National Team Coaches Mentorship Program to help elevate the level of homegrown national team players and coaches. White also was selected by East Asian Football Federation to be a member of the Technical Study Group for the finals of the East Asian Championships next month that includes Japan, Australia and Korea Republic, teams that have qualified for the 2014 FIFA World Cup.