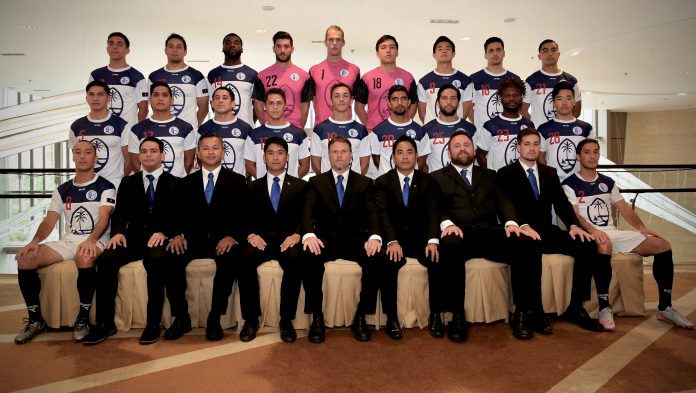 The Matao officially completed its campaign in the AFC Asian Cup UAE 2019 Qualifiers after recently receiving a letter from AFC confirming Guam’s decision to pull out of the continental tournament.

HARMON, GUAM – Primarily due to the foreseeable strain on the organization’s financial capabilities, Guam Football Association submitted its intention to pull out of the next round of the tournament’s qualification stage, set to begin in 2017 through to 2018, following a decision by executives and board members in a recent meeting.

“It is with a heavy heart that after deliberation among executives and board members that we have to pull out of the continent’s prestigious tournament at this stage,” said Richard K. Lai, GFA President. “We were very fortunate to have competed in the 2018 FIFA World Cup Russia and AFC Asian Cup UAE 2019 Joint Preliminary Qualification Round 2 in 2015 thanks to the timely financial support from the Government of Guam, Guam Visitors Bureau, FIFA, and all of our business sponsors. It cost over $1.5 million to compete in four away matches and to stage four home matches at GFA that year, and in the next round, it is anticipated to cost an additional $1.2 million for the next set of home and away fixtures.

“It is very heartbreaking for the entire GFA – executives, coaches, and players – because we earned such a grand opportunity to play at the next level of international football and it seems that we are giving it away. The truth is that we currently are not in a position to fund the expected expenses of the next round in a very short timeframe. It was also discussed that if we were able to source such a grand amount of money by next month, it may be better spent to further develop our youth and grassroots programs to prime those players to exceed the success enjoyed by the Matao in 2015,” Lai added.

Guam officially was accepted as a full member nation by FIFA in 1996 and after almost 20 years of building a grassroots program and systematically preparing youth players from then to compete internationally, executives and board members at that time decided it was the right time to gauge development efforts by committing to compete in the FIFA World Cup preliminary qualification stage in 2015, even without knowing Guam’s opponents, Lai said.

After the official draw, held in April 2015, Guam learned that all four of its opponents were either from West, Central, and South Asia, exponentially increasing expected travel costs that year, as well as travel distances, with little to no interest in international broadcast of the matches. Faced with the possibility of pulling out of the tournament toward the latter part of 2015 due primarily to financial constraints, the Government of Guam bailed out the Matao to continue competing in the qualification stage.

In the nine-month campaign, which concluded with an away match in Oman in March 2016, the Matao finished in a position high enough to bypass the Asian Cup’s playoff stage, moving straight to the next round of qualification against Asia’s middle-ranked countries. Guam also earned its highest FIFA/Coca-Cola World Ranking to date – No. 146 in the world – during the campaign.

“I’m very proud that the local community was able to watch the Matao in Guam defeat larger countries like Turkmenistan and India and also play to a draw against Oman, which is ranked in the top 100 in Asia,” Lai said. “The youth players now can see that winning against higher-ranked and bigger countries is entirely possible and when they are called up to represent Guam, they can continue that winning belief and confidence in themselves.

“I cannot say thank you enough to all who continue to support Guam and the Matao, especially the Government of Guam and GVB for providing the much needed funds for the team to finish out its 2015 campaign in the World Cup qualifiers. We’ve seen where we are compared to other Asian countries at the highest level of the sport and now we must continue to work with our youth to go even further on the international stage in the next few years. We also are better equipped to play host to international matches based on our first-time experience with home matches in World Cup Qualification – it was truly a growing pain for the organization, but we accomplished so much in a short period of time and for that I am proud of all who contributed in the success,” Lai added.

The final date to withdraw from the 2019 AFC Asian Cup Qualifiers without penalty is Jan. 9, with the official draw scheduled for Jan. 23. If GFA runs out of money to fund the Matao’s campaign after beginning competition and withdraws before completing the qualification round, Guam will be forced to pay a substantial penalty fee, as well as face other sanctions by AFC, which may jeopardize participation in future competitions.

Only nine of the other 23 countries qualified to compete in the next round of qualifiers are either in the East or Southeast Asian regions, making the expected cost of travel and distance in travel high. With the vast size of the continent of Asia, there have been discussions to create qualification stages closer to the member nation’s region to decrease extensive travel time between matches and also to assist smaller, less established member nations without the financial means as its larger, more established counterparts, Lai said. In September 2015, the Matao traveled to I.R. Iran to play a match against the host country and had only five days in between to fly back to Guam to play its next match against Oman. The travel from I.R. Iran and Guam crossed six time zones and while taxing for domestic players and coaches, was increasingly taxing for players flying in from the U.S. mainland.

The Matao most recently competed in the semifinal round of the EAFF E-1 Football Championship in Hong Kong last month.