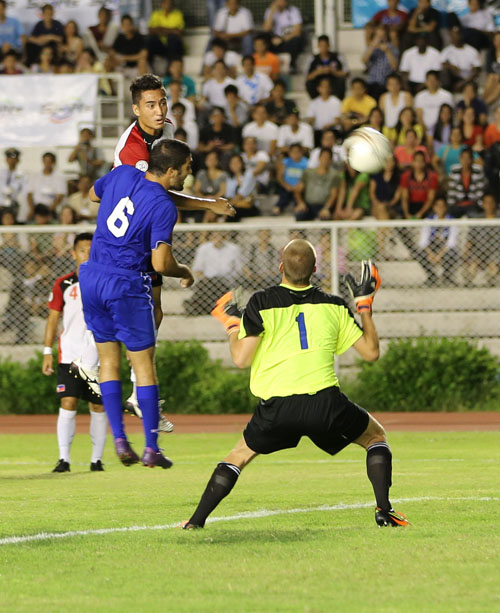 Guam – It was a predominantly a midfielders’ duel in playmaking in the Matao’s second meeting this year against the Azkals on opening day of the 2012 Philippines Football Peace Cup Tuesday at Rizal Memorial Stadium in Manila, Philippines.

With both teams finding limited opportunities near the goal, it would be the Philippines that would find the lucky shot to prevail 1-0 over Guam.

“We had our own opportunities to win the game,” said Matao head coach Gary White. “I think it was a very competitive game up until the 80th minute … then there was a slight lack of focus on our side and miscommunication between our goalkeeper and central defender that cost us the game ultimately.

“But the spirit of the players showed – we’ve got 17- and 18-year-old boys out there … some flew in (Monday) night from Boston. It was a hell of a performance on our side, though we’re disappointed that we lost,” White added.

[The Azkals’ Patrick Alcala Reichelt wins the header against Guam’s Scott Leon Guerrero (6) and sends his shot over goalkeeper Douglas Herrick to score the lone goal in an opening day match of the Philippines Football Peace Cup at Rizal Memorial Stadium in Manila, Philippines]

Patrick Alcala Reichelt scored his maiden goal for the Azkals off a header he side- flicked above Guam’s Scott Leon Guerrero in the 80th minute following a corner-kick play. Guam’s goalkeeper, Douglas Herrick, who was positioned behind Leon Guerrero on the play, was unable to stop the ball with his hands in time as it went over his head and into the goal.

Reichelt then led a parade of his teammates off the field to acknowledge his mother, who was only in Manila for one night and watched his game, in the stands.

“We were a little bit lucky,” said Azkals head coach Michael Weiss. “I’m happy with the result, but I’m not so happy about the game.

“Honestly, in the second half it was sloppy in the first 20 to 30 minutes. Guam was pressing us high up and we were very slow in building up … Also, the players who came in did not really strengthen the squad. They had difficulty in adjusting with the speed – this type of competition is different from training,” Weiss added.

On separate occasions, Guam’s Jason Cunliffe, Jonahan Romero and Ryan Guy were able to bring the ball into the attacking third and send the Azkals’ defense scurrying, but the team was unlucky with finishes near the goal. Marcus Lopez had one of Guam’s best opportunities in the first half, finding an open space for himself near the goal, but his shot cleared the crossbar – just barely – and landed on top of the net.

“It’s a tough loss,” said Cunliffe, Matao captain. “It was definitely a good game though – a lot better than in June.

“(The difference) is belief … stepping out on a pitch now, we believe we can win anytime we play,” Cunliffe added.

The Matao first played against the Azkals on June 12 this year in a FIFA-friendly match at Panaad Stadium in Bacolod. Facing one of the Azkals’ strongest squads that glittered with high-level professional players, Guam allowed three goals in the first half, but kept the same players scoreless in the second half.

In the tournament’s other opening day game, Chinese Taipei settled for a draw against Macau. Guam next plays Chinese Taipei on Thursday at 4 p.m. Manila time at Rizal Memorial Stadium. The Azkals then take to the pitch at 7:30 p.m. against Macau in the second day of competition in the four-nation tournament.