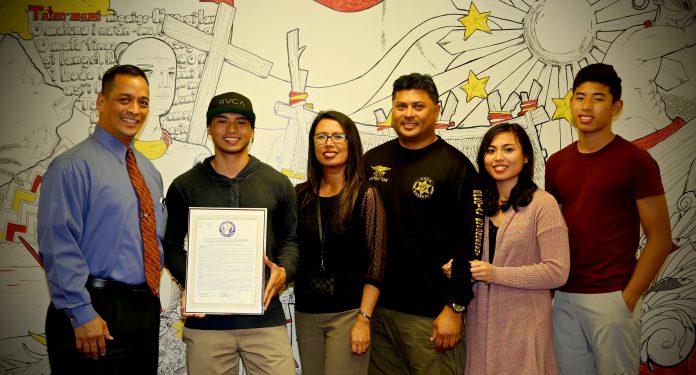 GUAM – The Naputi family and Sen. Frank B. Aguon, Jr. pose for a photo after the senator presented Matao wing back Dylan Naputi with Legislative Resolution No. 287-33 (LS) – Relative to commending and congratulating Dylan Pinaula Naputi. Naputi, 21, recently signed with VC Fusion, a team based in Ventura, Calif., which plays in the Southwest Division of the U.S. Premier Development League’s Western Conference. The presentation ceremony took place Tuesday afternoon at the Office of Senator Frank B. Aguon, Jr. in Hagåtña in front of a couple dozen of Dylan Naputi’s coaches, friends, and family. In the photo are from left, Sen. Frank B. Aguon, Jr., Dylan Naputi, Elaine Naputi (mother), Vince Naputi (father), D’Ana Naputi (sister) and Xavier Naputi (brother). Dylan Naputi will head to California after the Matao’s 2018 FIFA World Cup Russia and AFC Asian Cup UAE 2019 Joint Preliminary Qualification Round 2 match against Oman on Mar. 24 in Muscat, Oman.