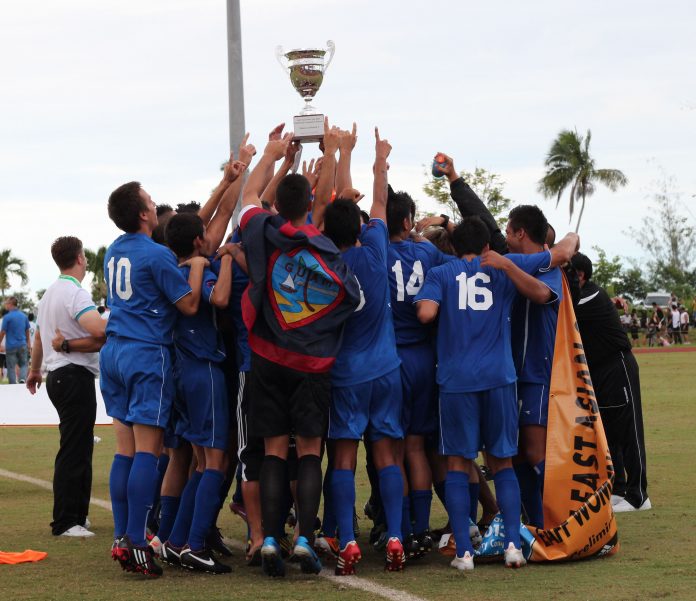 Manenggon, Guam – When push came to shove, the Matao, the Guam men’s national football team, relied on its fitness and physicality to muscle in a trio of goals and shut out Macau to win the East Asian Cup preliminary competition at Leo Palace Resort Guam.

[Photo: Members of the Matao hoist the East Asian Cup preliminary competition winner’s trophy following its 3-0 shut out win over Macau. Guam moves on to the second round of the EAFF tournament with the win.]

“We definitely look forward to playing in Hong Kong,” said Matao captain Jason Cunliffe after the game. “We’ve been working hard for this – putting in the hours of training twice a day, five times a week. It’s just great to see the hard work pay off.

“I also give credit to the Gaffer (coach Gary White), the staff and the lads on this team. I hope we turn a few heads while we’re out there,” Cunliffe added.

The game’s physical nature began early as both teams continuously looked to referees for foul calls. In the 13th minute, a collision in the midfield and the near physical altercation that followed prompted two yellow cards – one on Cunliffe and the other on Macau’s Lao Pak Kin even before any goals were scored.

As Macau continued the game flustered, Guam went to work finding the back of the net. In the 15th minute, Macau was able to break up the initial corner kick play, but could not secure the ball. The Matao’s Ian Mariano, fresh from sending the corner kick, repeated the intended play with another pass into the goal box finding Zachary DeVille on the left side. DeVille’s header looked to be going wide near the right post, but Cunliffe made his way toward the ball to head it in for the score.

Seven minutes later, Marcus Lopez beat Macau’s defenders toward the goal and managed to avoid a slide tackle by Macau’s goalkeeper Ho Man Fai. Lopez then proceeded to kick his shot into an undefended goal for the 2-0 advantage.

Both teams then played close to 70 minutes of scoreless soccer, tacking on four more yellow cards between them in the process.

DeVille nailed Guam’s final goal on a header in injury time to stamp the Matao’s authority, following up on a shot by Lopez that bounced off the crossbar.

During the awards ceremony immediately after the match, Cunliffe was awarded the preliminary competition MVP award – his second in a row – and also the competition’s Golden Boot award. The Matao captain scored four goals in two games to lead all other competitors in scoring.

The 3-0 win over Macau is Guam’s second shutout win over a FIFA member nation. Guam’s very first win and shutout of a FIFA member nation came in the East Asian Cup preliminary competition in 2009, a 1-0 victory over Mongolia. That same year, Guam settled for a 2-2 draw with Macau, but still managed to win the competition based on points. Cunliffe also won the preliminary competition MVP award in 2009 and Brett Maluwelmeng, now assistant coach for the Masakåda, Guam women’s national football team, was distinguished as the competition’s best goalkeeper that year.

Guam currently is ranked No. 194 in the world and with the win over No. 199-ranked Macau, the island may move up to No. 187 based on the FIFA.com ranking prognosis.