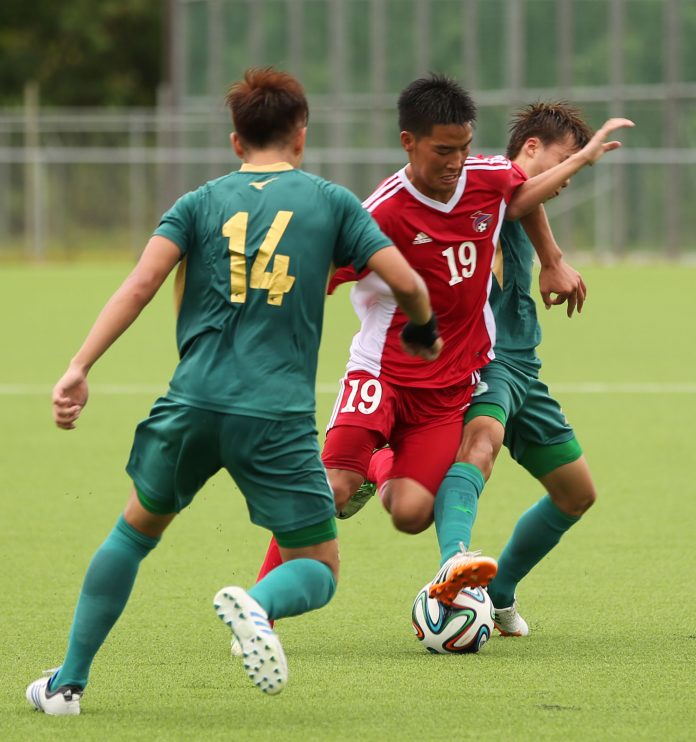 The Matao secured its Round 1 champion slot in the semifinal round, finishing undefeated in three matches following its 5-0 shutout of the Northern Mariana Islands Friday evening at the Guam Football Association National Training Center in pouring rain.

“Advancing three straight times to the semifinal round of this tournament shows that there’s sustainability in our program – that there’s depth,” said Gary White, head coach of the Matao. “We come into these tournaments expecting to win rather than just playing in them. Now, we’re going up to the next level to play against other internationally recognized teams like DPR Korea and show our quality against them.

[Mongolia’s Bilegtii Dashnyam gets tangled up between two Macau defenders on his way to the goal during a match of the EAFF East Asian Cup Round 1 Friday at the Guam Football Association National Training Center. Macau upset Mongolia 3-2.]

“It also shows the level of support from GFA and GFA Executives over the years that is coming to fruition. As a coach, I couldn’t ask for more support than I’ve been getting from GFA President Richard Lai and the Executives. There’s a lot of behind-the-scenes work most don’t see that require a great deal of financial support and resources. For instance, we were just in a 14-day training camp at LeoPalace Guam Resort that was crucial in preparing the team to win the tournament,” White added.

In the early game Friday, then fourth-ranked Macau upset Mongolia 3-2, setting up a winner-takes-all scenario in the tournament’s final match between Guam and the Northern Mariana Islands. There was no question in the Matao’s superior performance in the match, which resulted in first-ever international goals for Guam from John Matkin and Shawn Nicklaw, as well as goals from Ryan Guy, Marcus Lopez, and Ian Mariano. The win by Guam squashed any hopes from NMI of a fairy-tale run to the semifinal after the team had earned its first-ever win in the EAFF – a 2-1 win over Macau Wednesday. The first time Guam won a match against a FIFA member nation – a 1-0 shutout of Mongolia in 2009 – the team went on to advance to the East Asian Cup semifinal. 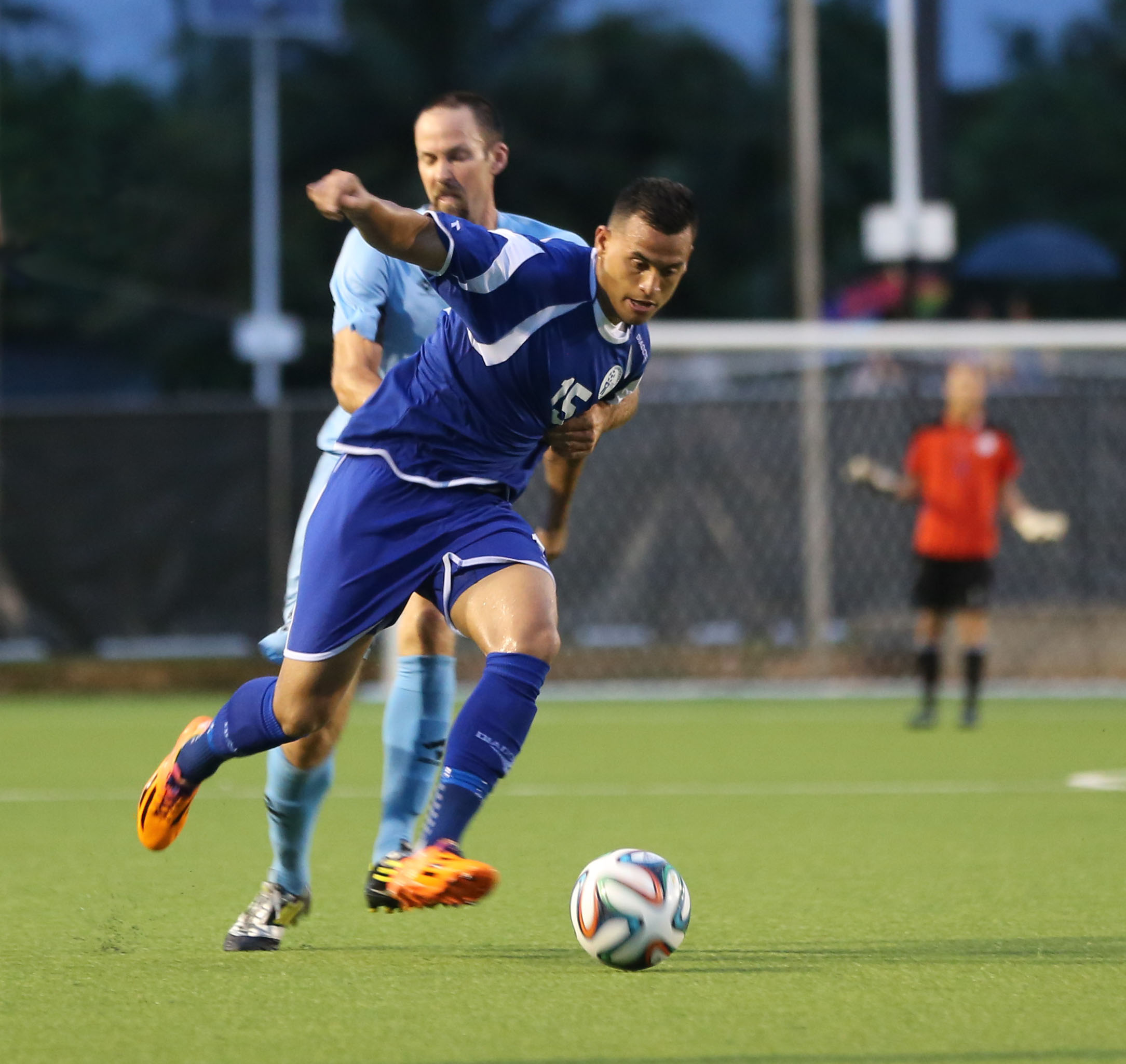 [Guam’s Shawn Nicklaw gets held back by the Northern Mariana Islands’ Nicolas Swaim en route to the goal during a match of the EAFF East Asian Cup Round 1 Friday at the Guam Football Association National Training Center. Guam blanked NMI 5-0 to advance to the tournament semifinal round for the third-straight time.]

“The team was fantastic in its match against NMI,” White said. “It’s a bit difficult to play against teams that just sit behind the ball like they did – they rarely got outside the half and for some teams, it can become frustrating. Winning by a large margin shows our experience and maturity, dealing with that type of football.”
At the tournament’s awards ceremony, Guam swept all trophies. In addition to the championship trophy, Guy was awarded the tournament’s Top Scorer trophy, as well as the tournament MVP trophy. Guy scored a trio of goals in three matches.

The Masakåda, Guam women’s national team, also will be making its way to Chinese Taipei in November to compete in the semifinal round of the EAFF Women’s East Asian Cup. The women’s team scored 18 goals in two matches to advance to the next stage. In the women’s tournament awards ceremony, Paige Surber won the tournament’s Top Scorer award, netting six goals in two matches. Teammate Samantha Kaufman was recognized as the tournament’s MVP. Masakåda head coach Sang Hoon Kim accepted the award on behalf of Kaufman, who returned to the United States to compete in the championship weekend of the U.S. Women’s Premier Soccer League in Maryland with her club team, Beach Futbol Club. 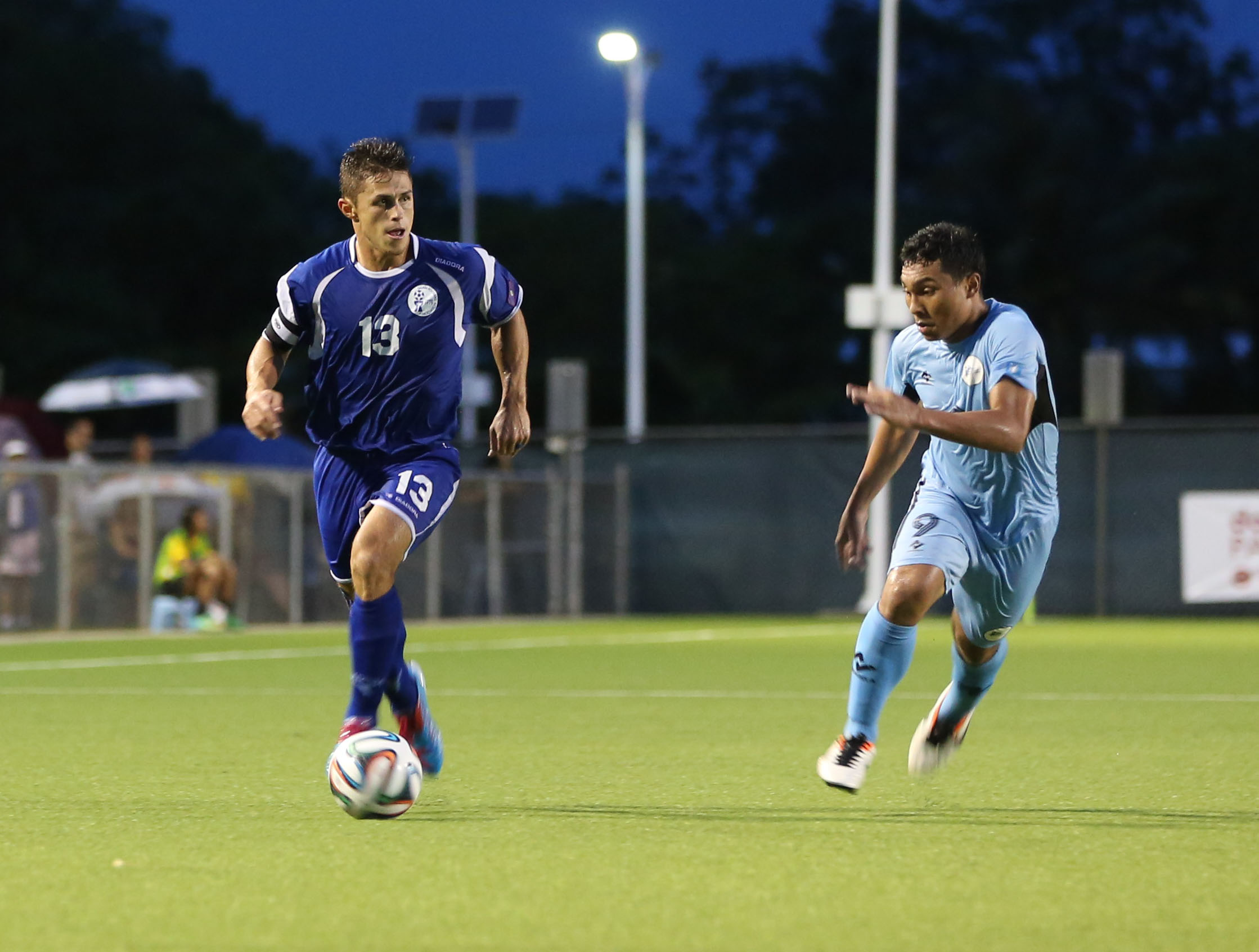 [Guam’s Ryan Guy looks toward the goal for an opportunity after outpacing the defense of the Nothern Mariana Islands’ John Raymond Taisacan during a match of the EAFF East Asian Cup Round 1 Friday at the Guam Football Association National Training Center. Guam blanked NMI 5-0 to advance to the tournament semifinal round for the third-straight time.]