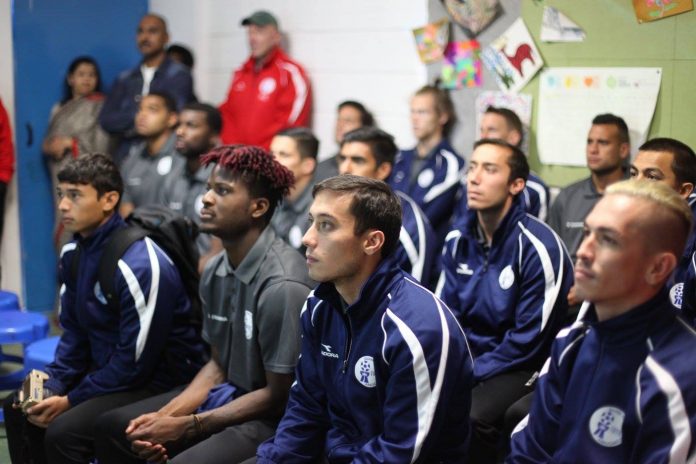 One of the best parts of being an international footballer is that you get to travel the world, playing the game that you love.

BANGALORE – Far too often though that world is one lived in hotels and on the training grounds with only minimal interaction amongst the people whose country you’ve come to play.

On Tuesday, the Matao got to see the other side as they spent the morning at a school for underprivileged children in Bangalore.

The Parikrma School has helped to transform the lives of more than 1700 children since it’s founding in 2003 where they provide quality education to the poorest of the poor, with the children coming from more than 70 slums dotted throughout the city.

With more than 30% of the country living below the U.N. poverty benchmark of earning than $1.25 per day India has millions upon millions of needy children and the Matao got to touch the lives of some of those children with their visit.

Upon the team’s arrival they were greeted by the beaming students and then asked to light floating candles in a sense of community.

The team was shown a short video presentation about the school and spent the rest of the morning interacting with the several dozen students who had all turned up on a national holiday to meet the Matao.

Players and students – the bulk of whom are keen football fans – then spent time chatting and playing games on the earthen school pitch.

As Gary White, head coach of the Matao, said it was a life-changing day.

“For these children to see international footballers is obviously a thrill but just as importantly for our players to have this experience is something they can carry with them forever.”

“It helps you realise just how fortunate we are to be doing what we love and we were so grateful to meet some of these wonderful young children.”

The Matao will continue their preparations for Thursday’s 2018 FIFA World Cup Russia and AFC Asian Cup UAE 2019 Preliminary Joint Qualification Round 2 match with India on Wednesday at the venue for the match, the Sree Kanteerava Stadium in Bangalore.

Following the Nov. 12 fixture in India, the Matao will return to Guam to play against Asia’s No. 1-ranked country, I.R. Iran at the Guam Football Association National Training Center on Nov. 17. The home match will kick off at 3:30 p.m.