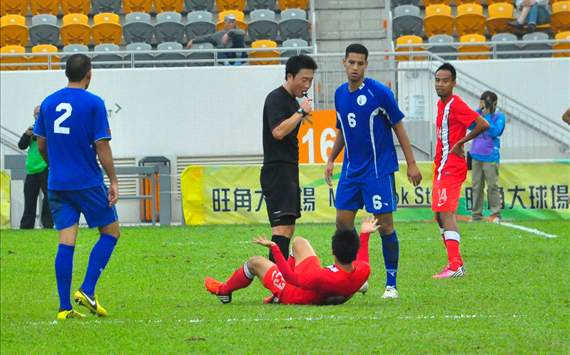 Guam – An Indian website, goal.com , has posted a story taking a look at the Guam men’s soccer team, the MATAO, ahead of the upcoming Asian Football Confederation (AFC) Cup qualifying round.

In an article titled “Knowing India’s Rivals – Guam”,  Ayush Srivastava writes “hosts, Myanmar, and Chinese Taipei are expected to be the teams vying with India for a spot in the 2014 AFC Challenge Cup … but the Matao could very well stun one of these three sides.”

READ the goal.com analysis of  the MATAO HERE

The posting points out that the Matao are not really a powerhouse, “they are the weakest side in India’s group.”

But again, as other international media have recently noted, Coach Gary White is credited with turning around the fortunes of the Guam team.

Up until White’s arrival in February 2012, Srivastava notes, the Guam team had won just 1 game since joining FIFA in 1996. That was a 1-0 victory over Mongolia in 2009. But in the past year with White at the helm, Guam has won 3 games.

“In the past one year, the Matao have played ten international ties, winning three times, drawing once against Chinese Taipei, while losing the other 6 games. Their last tie ended in a 9-0 drubbing by the hands of Australia.”

How did he do it?

Srivastava points out that White has recruited several foreign based players with Guam roots, and “his overtures have met with success …  One of the key players that White lured into his set-up was Ryan Guy.”

In addition, he notes that the Guam team was short on confidence when White joined.

But he turned that around by building “a better connect with the native Chamorro culture,” and “he makes the players do the Inifresi, which is a chant on the lines of Haka, made popular by the New Zealand rugby side. It’s seen as a way of players demonstrating their commitment to the country.”