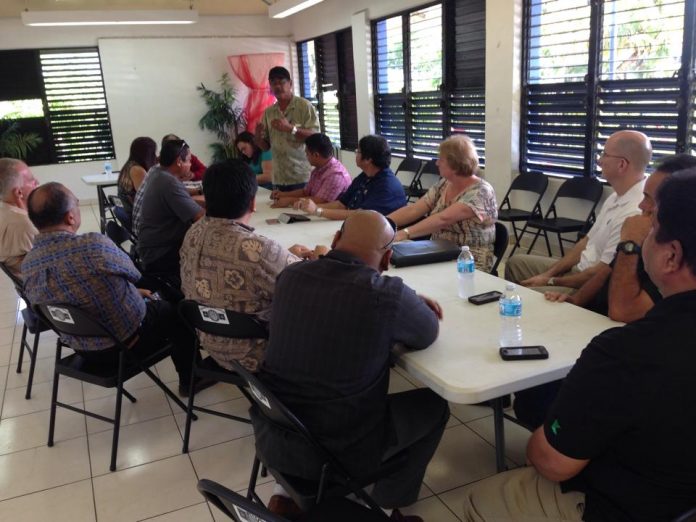 Guam – Asan-Maina Mayor Joana Blas initiated a meeting this morning with government officials and residents of Turner Road aftr the landslide and earthquake that caused a panic at the hill yesterday.

Mayor Blas continues her push to improve the conditions of Turner Road, also known as Channel 10, for the safety of her residents.

During the meeting, stakeholders including the Department of Public Works and Land Management, weighed in solutions for many of the issues regarding the treacherous road. Residents brought up drainage, easement, signage, maintenance and repairs as predominant problems.

After the erosion that caused at least a 30-feet drop on the cliffside, Mayor Blas was afraid of casualties that may ensue. Yesterday, she advised to close off the road and give access to just local traffic, but after discussions at the meeting, closing the road is no longer an option. The idea of limiting the amount of traffic was also shut down as DPW says it will be hard to control and enforce.

Resident Benjamin Abram says even unobstructed, the road is very narrow. He suggests, “If the bushes were cut back, it’s going to widen it to the point where it’s very improved and a lot less dangerous than it is now. The second thing is that there are a couple of S-bends where it’s not only narrow, but there’s a sheer drop off on the Northern side of that road. Something must be done to make sure there’s no potholes in that S-bend area.”

He continues, “One time Judge Perez said he tried to get up there once and he thought it was a “death trap”. Those were his remarks. It is dangerous and we need to do everything we can to make it less dangerous. I think the Governor’s Office needs to kick in a little bit there to make sure this danger subsides.”

DPW Deputy Director Jessie Paliman says guard rails are still in the works, but funding is the problem. After stakeholders took a tour of Channel 10 this morning, Paliman says Land Management will be given a week to survey the road before other plans can be made.

When asked who is the responsible party that would have to analyze the road and check for erosion underneath, he answers, “Good question. We haven’t reached that point yet, but now Land Management can mark the boundaries, to see how much rights of way we have and work from there. The utilities can then step in and review that and see if we can move it further, are we able to lay some gravel for now…Within a weeks time, we will get back to the Mayor and plan more from there.”