The same house where the body of the former Umatac mayor was found was burned to the ground.

So should Umatac residents be concerned about their safety?

Umatac Mayor Johnny Quinata attended the Bill 60-36 signing ceremony Friday and advises the community to be aware of their surroundings.

“Anywhere you go, you gotta watch behind you, in front of you, beside you, and you just have to think safety. Right now, the world is not in a stable condition, so you have to open your eyes and look around you. You see something that is not right, call the cops. Call the police,” the mayor said.

He added that his priority as mayor of Umatac is his village’s safety.

But Quinata assures that his village is safe.

PNC reached out to GPD regarding the murder of former Umatac mayor Daniel Sanchez but still has to receive a response. 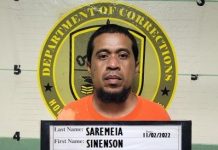