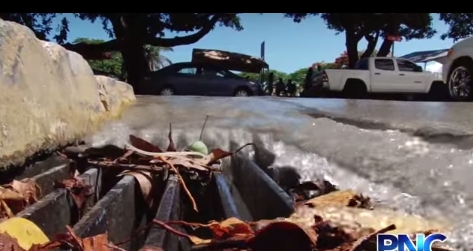 The mayor cites issues dating back a decade.

Guam – Guam – Erosion, flooding and wasting clean spring water… these are a couple of lingering issues that are facing the village of Asan thanks to a non-working GWA well and clogged up storm drains.

Mayor Joanna Blas says this has been a problem going back 10 years. Fresh spring water connected to the Fonte dam has been overflowing from a GWA well on Santa Ana road in Asan. In effect the water has been wasting away in Asan.

“Since I came in in 2013, concerns in fact. I have a history of it, where people would bring down concern as to the water coming down their house, the water overflowing in the storm drains and that’s 2013 to this date,” said Blas.

There are two separate issues at hand. The first is the constant overflow of water from clogged up storm drains. The second issue the wasting of fresh spring water that could be used for water to Asan residents.

The source of the water is from the Fonte dam. It then travels into old GWA well on Santa Ana road that is not currently in operation. The water continually overflows from the well and into the storm drains, where it fills up the storm drains and overflows into the street. Asan mayor’s office employees say when it rains heavily, the water will overflow directly from the well and into the street, making it dangerous to drive or walk on the nearby street.

Blas says the issue starts with the storm drains. She says the maintenance on the drains is lacking. Again, the mayor cites issues dating back a decade.

“For so many years, before I came in, it has blocked the area for the water to flow through. So its overflowing and creating digging erosion in some of the residents and also water is coming out in residents homes,” said Blas, “If we do maintain this storm drains it won’t be overflowing on the road and the water that’s coming from the well, if the well is being maintained also, we can use that water.”

Asan Department of Public Works Director Glenn Leon Guererro handle the overflow of water coming from that area. Says the issue starts with the GWA well. He says storm drains are not meant to handle that much water on a consistent basis. He says DPW workers have been clearing out that drain for as long as he’s been there and will continue to do so. But as for a long term fix, he says the well needs to be fixed…. enter GWA and Blas’s second issue, the usability of the fresh water.

GWA spokesperson Heidi Ballendorf says the well is on GWA’s list of projects to get too. She says the project to fix the well is in procurement and GWA has a design for it. But even though GWA is currently working on the project, Blas says the natural spring water has been overflowing for years and it will continue to do so, until the well is fixed.

“The well was closed down, so many years ago. But you know what, it’s there, why can’t we fix it and get the water?” said Blas.