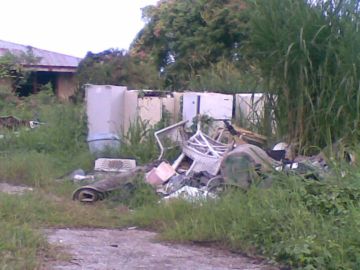 Guam – Pictures of an illegal dumping site in Agana Heights surfaced on facebook.com Tuesday night after a resident who says she is “Sick and tired” of seeing the trash posted the images on the social networking site and tagged a number of Guam Officials.

“There’s maybe five or six (illegal dump sites) in Agana Heights,” Agana Heights Mayor Paul McDonald said during the Mayor Council of Guam meeting Wednesday morning.  “I’ve reported it to EPA, to the Guam Police Department and they didn’t want to have anything to do with it.”

Governor Eddie Calvo’s Senior Advisor to External Affairs Telo Taitague was at the meeting.  McDonald told Taitague that he hopes the new Governor can change attitudes in GovGuam to “Get things done.”

Sinajana Vice Mayor Robert Hoffman, who was tagged in one of the images on facebook, agrees with McDonald and say that cooperation between agencies needs to happen because he believes problems like illegal dumping aren’t going away.

“Everybody wants the problem to go away but whose willing to be the agency that’s responsible?” Hoffman asked.  “That one incident on facebook really brings to light the problems we face everyday.  Today it’s junk, tomorrow its potholes and then something else.”