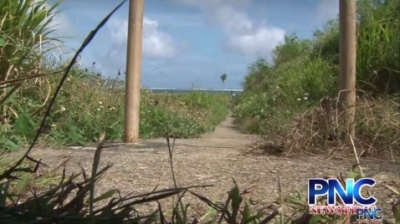 In the latest letter to the Mayors Council of Guam, Attorney General Elizabeth Barrett Anderson says she will not represent the mayor’s council in its bid to petition for a judicial review of the Pago Bay development project.

Attorney General Elizabeth Barrett-Anderson says she can’t get involved in a potential lawsuit that could be filed by the Mayor’s Council of Guam.

In the latest letter to the Mayors Council of Guam, Attorney General Elizabeth Barrett Anderson says she will not represent the mayor’s council in its bid to petition for a judicial review of the Pago Bay development project. Initially, Ordot Chalan Pago mayor Jessy Gogue and Yona mayor ken Joe Ada filed the petition to which the AG declined, saying she cannot represent the two mayors.

“What the council agreed to do is submit this letter. Under the councils letterhead asking for a substitution that they wanted to be the plaintiffs now instead of just the mayors of Ordot Chalan Pago and yon and we recently got a response to the request for substitution and once again the AG denied our request for that substitution,” says Gogue.

In her letter to MCOG president Paul McDonald, Barrett-Anderson says, “there is no statutory authority for the council to sue or be sued.” Gogue, however, says the MCOG does not want to sue anyone.

Gogue says the project violates at least one mandate, which says, in short, that the proposed project should not be materially detrimental or injurious to the zone or neighborhood. Some Pago bay residents have also argued that the hotels would further strain power and water infrastructure in the area, a view shared by Consolidated Commission on Utilities Chairman Joey Duenas who said last month that the existing GWA infrastructure in Pago Bay cannot handle the added strain of the proposed hotels.

“This decision not only affects Ordot Chalan Pago, and the Yona community it affects all 19 jurisdictions, because if they didn’t fulfill their mandates and the fact that they approved an application without fulfilling their statutory mandates that means not only can they do that here in our district but they can do that in all 19 jurisdictions,” says Gogue.

When the GLUC approved the project they gave developers certain conditions be met  or else they could lose the project. One of the conditions is regular 6 month checkups from the developer to the GLUC that include a performance bond to ensure there is money available to demolish the towers if the project stalls.

The MCOG has redrafted its original letter to clarify to the AG that they are seeking, at the very least, legal clarification to find out if the GLUC followed all statutory mandates when they decided to allow for the construction of the Pago Bay hotels.