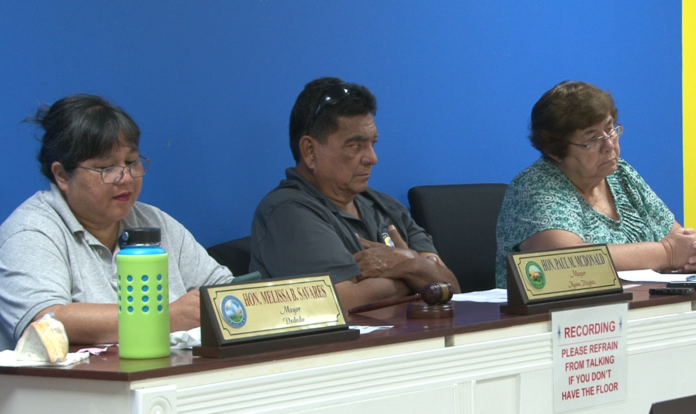 During a meeting of the Mayors’ Council this morning, Education Board Chairwoman Maria Gutierrez shared safety concerns continue to grow as high as the grass surrounding school campuses.

“We’re saying that if you want it back, we’ll give it back to you. It’s been a headache,” exclaimed Agana Heights Mayor Paul McDonald.

But GEB Chairwoman Gutierrez countered, “The law is very clear. And that it is tied in your appropriation: ground maintenance for schools.”

Gutierrez provided a survey conducted by the Department of Education. In it, public school principals were asked to rate their mayors on lawn maintenance services. Most mayors received a rating of satisfactory or above, but some mayors received a “poor” rating.

The survey caused a stir among the council.

“Contractor prices are up here and the amount of appropriation that we got is down here,” expressed Mayor McDonald. “Mayors have other responsibilities within our districts. And, as a matter of fact, Mayor Alvarez had mentioned that he wants to give up cutting Southern High’s grass [altogether].”

And in the survey, Southern High School’s principal agreed.

“We have had to contact our mayor on many occasions to cut the grass as we have overgrown vegetation throughout the campus. We recently met our mayor over the break and have an understanding on the cutting expectations and supports,” noted its administrator.

In addition to a lack of funding, Mayor McDonald explained that it is almost impossible to cut the grass during rainy season.

Ultimately, GEB Member Mark Mendiola asked both parties to come to some sort of a consensus.

“I’m looking at the finances within DOE, but folks, it’s the law. And we got to figure out how to make it work because it’s our kids,” Mendiola said.