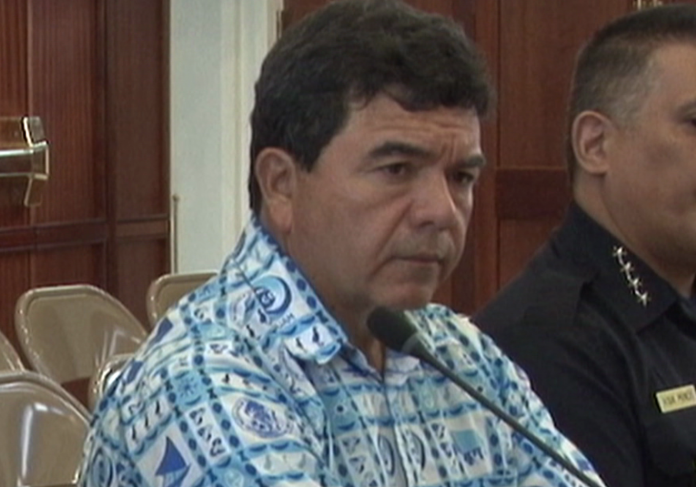 Guam – Former Adelup cabinet member Jim McDonald is blowing the whistle on the outgoing administration’s alleged shady tactics, accusing the Governor’s Office of blackmailing him while attempting to cover up for a drug suspect.

The bombshell was dropped early this morning on NewsTalk K57 when terminated Department of Corrections Deputy Director Jim McDonald called into the Mornings with Patti Show.

McDonald revealed in a two part interview that he was first shuffled out of the Customs and Quarantine agency for refusing to return contraband—specifically, butterfly knives confiscated from Eric Palacios. McDonald also claims that Adelup ordered him to remove a drug suspect from a suspect list.

“When they wanted me to release contraband, I totally refused and then when they wanted me to take a suspect out of the suspect [list]. I said nope, it ain’t gonna happen. And I get a call from Adelup, they said, ‘Oh, you don’t work well with Adelup. It’s time for you to go,'” describes McDonald.

In April, McDonald was removed as the director of Customs and Quarantine and replaced by none other than Eric Palacios—the same man who allegedly attempted to smuggle contraband and later asked for them back.

These confiscated items would later become the catalyst for Palacios’ failure to get his nomination confirmed. Attempting to smuggle contraband and other past transgressions were cited by Public Safety Chairwoman Sen. Telena Nelson as the basis for refusing to move Palacios’ nomination out of committee.

In fact, McDonald describes how the request was made for the butterfly knives to be released and in that request, there was a subtle threat.

“When I ran into [Palacios], he said our guys have confiscated his contraband and he felt that that contraband was supposed to be allowed to be released. I told him no, it’s a federal law, contraband is contraband, especially butterfly knives, it’s a deadly weapon. And of course he was saying that we’re gonna get down to bottom of this because I feel you guys should release it because it’s for personal use,” recalls McDonald.

And the removal of the suspect from a suspect list? The individual apparently was convicted in federal court and served time on drug-related charges.

“They wanted me to remove someone from the drug suspect list also and I said no. The only way a person’s name is gonna be removed from that suspect list is if we get our federal partners to say that this person has served his time and paid his dues and apparently they weren’t happy again with that,” McDonald explains.

That wasn’t the end of it for McDonald. With less than six months left in the administration, he was given the deputy director post at the Department of Corrections. But it would take a meeting between McDonald and the Leon Guerrero-Tenorio transition team—essentially the political opponents of Lt. Governor Ray Tenorio—as well as an endorsement by McDonald’s brother, Agana Heights Mayor Paul McDonald, for Tenorio’s rival—for Adelup to give him the boot.

“I’m the type of person, I don’t hide stuff you know. I could have told the–whoever is in the transition team, let’s meet somewhere and all that, but I had the courtesy to let [the Calvo-Tenorio Administration] know. I said you know these guys are asking for input on how they can select the people, managers in public safety and I feel it’s my responsibility to give them some good advice,” says McDonald. “And apparently the administration wasn’t happy with that.”

He adds: “You can say I was terminated because they said I only have till the end of the day to clear my office.”

McDonald left his position as the DOC deputy director and later it was announced that he would be replaced by Palacios.

Palacios, meanwhile, denies the allegations that he personally asked McDonald for his butterfly knives back. Adelup also responded to a request for comment, saying, “the allegations are untrue.”