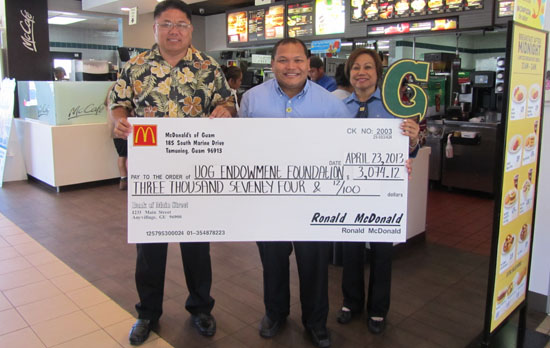 Guam –  McDonald’s presented a check to the University of Guam Endowment Foundation at their Harmon location on April 23, 2013 in the amount of $3,074.12.

McDonald’s had graciously accepted to be the Triton Business Partner for the month of March. McDonald’s pledged to contribute a percentage for every Double Filet-O-Fish Meal purchased during the entirety of March.  All proceeds made from this program were to support the University of Guam’s 60th Anniversary Capital Campaign in building a 21st-Century Campus for our future generations.

“ McDonald’s is proud and honored to be in the position to support the University of Guam, where education excellence, community engagement and teaching local values help shape  our leaders of tomorrow.  Developing leaders is something McDonald’s continuously strives for every day.” said McDonald’s Operations Consultant, Mr. Pacifico Martir.

The “Triton Business Program” is a partnership between the University of Guam and local businesses that offer “Triton Specials,” in which a portion of the proceeds from the specific item gets donated to the Capital Campaign.

“We are tremendously grateful for the generous support and contributions given from the McDonald’s Familia. Their support for higher education within the region will only come back ten-fold for the people of Guam.” said Mark Mendiola, UOG Endowment Foundation Executive Director.

McDonald’s has a total of nine locations throughout the island:

Bill prohibiting GPD budget from being used for executive security to...