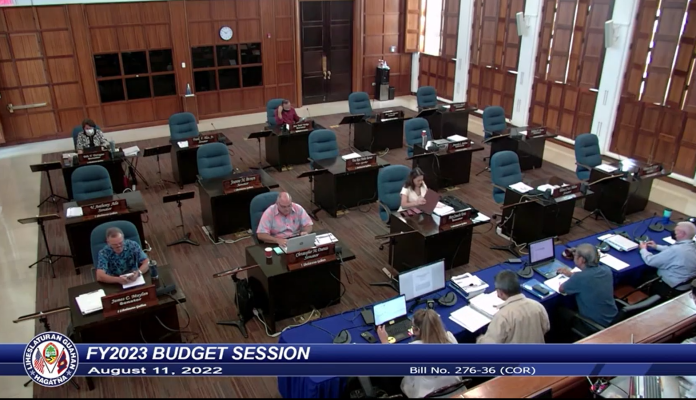 “We are taking it out of the goodwill of the administration,” says Mayor Jesse Alig.

Mayor Alig is also the President of the Mayor’s Council of Guam – and is confident that adelup will provide the funding source for approximately 100 employees.

Continuing from this week’s Fiscal Year 2023’s budget session a concern was brought up by Senator Joanne Brown regarding multiple agencies receiving a cut in their budget specifically targeting the budget cut for the Mayor’s Council of Guam.

Brown asked, “Can you elaborate because that’s quite a high figure for the mayor’s council what has contributed to this 2.8 million?”

Steve Guerrero, Director of the Office of Finance and Budget responded to Senator Brown’s question stating, ” In FY 22 their appropriation level was appropriated through the Guam highway fund, we advised them last year when we were putting together the budget together is that we intend to right-size all these special funds, and only fund those agencies that this fund was created for.”

According to Guerrero, his predecessor would use these special funds to fund departments that would not be funded by this source.

He added that over the last few years OFB has been trying to slowly begin to wean these departments off to try and get them back to using the fund source that they were supposed to be funded by.

This was supposed to be implemented last year but due to the time frame being too short MCOG asked for an extension and was granted so they could notify approximately 100 employees of the shift in funding source.

Director Guerrero said, ” This year we hope that… we had communication with the governor and the governor has already committed to funding these positions .”

Furthermore, Senator Brown questioned where the funding source will come from and how they make up the difference if it’s not from the special fund.

She said, “We have 100 plus community service workers that we are assuming the governor is going to transfer money to fund them this upcoming fiscal year .”

The Director says that the assurance from Governor Leon Guerrero, along with the agreement made with the MCOG is enough to address the issue.

However, for Senator Brown, this was not a sufficient answer.

In an interview with Patti Arroyo on Newstalk K57, Jesse Alig, President of the Mayors of Council of Guam said they have been working with OFB to get off the Guam highway fund.

Saying, “We have agreed with the administration that we would work towards that and that they have committed to cover those funds of the 2.8 million in some other way so I do know the senators are concerned about it but I do know that it’s not set in stone, it’s not law but I am confident that the mayors of the council will not be running short.”