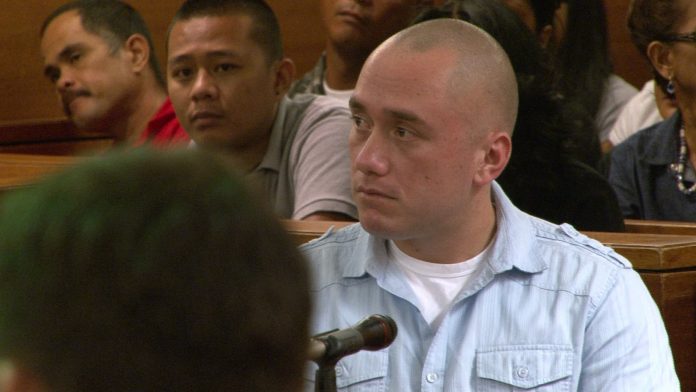 The defense team is also asking that Mark Torre Jr.’s father be allowed to return to their residence in Yigo despite an order that the father and son not be allowed to communicate or have any contact with one another.

Guam – Former Police Officer Mark Torre Jr.’s defense team has filed a series of motions that include banning media from using cameras in the courtroom, asking for a private investigator and forensics expert and a request to allow Torre’s father to return to their Yigo residence.

Torre, who’s accused of murdering fellow police officer Sgt. Elbert Piolo last month, was released on house arrest and ordered to put up a $165,000 property bond. Part of the release conditions include no contact or communication between Torre and his father, Lt. Mark Torre Sr., who’s also with the Guam Police Department. Torre, Sr. is considered a material witness in the case.

While the father and son have abided by the conditions so far, one of Torre’s legal counsels, Attorney Zachary Taimanglo, says in court documents that the separation is creating some financial hardships for the Torre family because they’ve had to fork out more money to pay for a second residence while Torre, Jr. is without a job.

Taimanglo notes that GPD has already completed its investigation of Torre, Sr. and that the father is not assigned to his son’s murder case. Taimanglo is asking that Torre’s father be allowed to return to the Yigo property while he assures that the father and son would obey the court’s order not to communicate with each other.

In addition, Taimanglo is asking that the court pay for expert witnesses like a forensics expert and a private investigator. Torre Jr., who voluntarily left GPD, “is now without financial resources to defend this case.”

Taimanglo points out that the high profile case calls for a private investigator and forensics expert to properly defend Torre’s case.

Finally, Taimanglo refers to what he calls excessive media coverage of the murder case and even mentioning the “Justice For Bert” campaign that was launched by Sgt. Piolo’s family and friends. For several weeks now, Sgt. Piolo’s supporters have been holding rallies at various intersections around the island holding up signs that read “Justice For Bert.”

Taimanglo says the “sensational media coverage” substantially jeopardizes Torre’s right to a fair trial. He’s asking that the media be sanctioned by banning media from filming or photographing all future court proceedings in the Torre case. Taimanglo believes some media outlets have demonstrated “contemptuous disregard” for the court’s order on recording devices.

Taimanglo is seeking an order “prohibiting the use of cameras, video, audio, images, recordings in the courtroom proceedings in this case, as well as prohibiting the re-publication and re-transmittal of any and all video, audio, images, recordings obtained in these proceedings, as they materially interfere with defendant’s rights to a fair and impartial jury as well as a fair trial.”

You can read more by clicking on the links below.

Defendant’s Standing and Continuing Objection to Orders Permitting Use of Cameras and Display of Images.pdf: