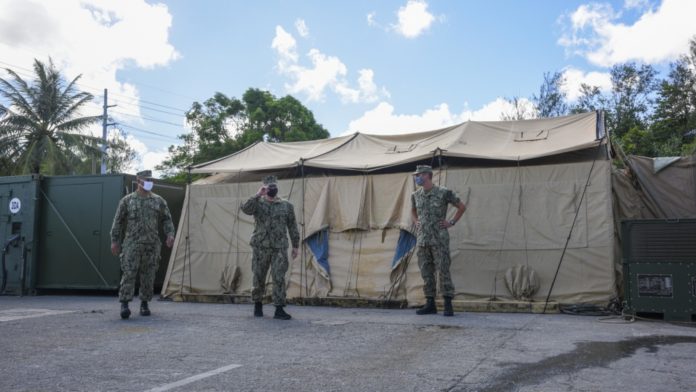 Although the EMEDS, currently located on the grounds of U.S. Naval Hospital Guam, and its accompanying medical staff will return to JBER in the coming weeks, they remain prepared to return to Guam, as required.

“The flexibility and leadership demonstrated both by the Government of Guam
and the Department of Defense are a testament to why we are able to uphold
mission readiness at all times,” said Rear Adm. John Menoni, Joint Region Marianas Commander. ”

“The ability to respond quickly is further proof there is no challenge we cannot overcome when we work together.”

The 36th Wing, with support from Air Force personnel from JBER, is scheduled to break down the EMEDS over the coming weeks. The EMEDS system was originally constructed to support the recovery efforts for Sailors assigned to U.S.S. Theodore Roosevelt (CVN 71) as a critical medical capacity backstop for the medical providers of U.S. Naval Hospital Guam.

Fortunately, to date, the number of COVID-19 cases in Guam and the region has not exceeded the treatment capacity of local civilian and military medical facilities. However, DoD continues to support and monitor the whole-of-government effort to combat COVID-19 and forces remain postured to rapidly respond to a change in conditions.

“We are thrilled that the additional EMEDS inpatient capacity was never needed and we remain at the ready to support JRM and the people of Guam as needed,” said Col. Kirk Winger, 36th Medical Group Commander.

The EMF, which is fully operational after relocation to Naval Base Guam’s Santa Rita compound, is a self-contained medical care facility which will remain deployed on Guam to provide expanded medical capabilities in support of the DoD’s COVID-19 response.

Specifically, the EMF provides contingency medical services, similar to that of a community hospital, including operating rooms, an intensive care unit, an acute care ward, extended patient holding, equipment sterilization, a medical laboratory, a pharmacy, and other ancillary services.

This means the EMF remains postured to support Guam and the region if a Defense Support of Civil Authorities (DSCA) mission is requested, or for other contingencies, and the EMEDS team will be prepared to return to Guam, as needed.

As the COVID-19 pandemic and typhoon season develop, Joint Region Marianas leadership will evaluate the need to maintain expanded medical capabilities on the island. Although some military medical personnel may return to their duty stations in the near future, the medical equipment will remain in Guam as a precautionary measure.