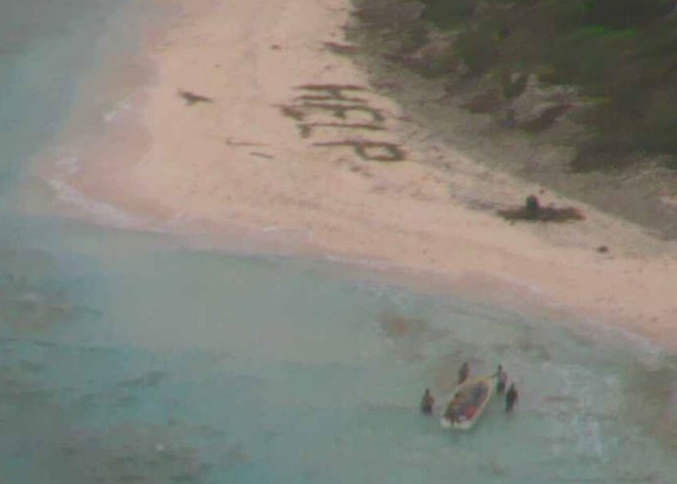 US Coast Guard Sector Guam received the distress call and coordinated the search and rescue efforts in partnership with the US Navy and the FSM government.

Guam – You may have heard about the three castaways who were rescued from a remote island in Chuuk last week. We met with the people behind the search and rescue efforts to find out how they were able to successfully locate the stranded men.

They are the US Coast Guard Sector Guam and they cover one of the largest search and rescue areas here in the Pacific.

“Since the 28th of March, I believe, we’ve had 10 cases, similar type where vessels have been missing, people have been underway for several days, and we’ve had success in locating the individuals,” says Lt. William White, USCG Sector Guam public affairs officer.

Last week, Coast Guard sector Guam led the coordination efforts in finding three mariners in Chuuk who failed to return from a fishing trip. OS1 Michael McCandless was the one who received the call.

“A call came in from the SAR liaison in Chuuk reporting that a vessel did not make it back to where they were schedyled to make it. So there was a 19-foot skiff with three persons on board that was missing somewhere between the island of Pulap and Chuuk which is approximately 150 nautical miles,” says McCandless.

McCandless says from there Coast Guard Sector Guam reached out to their district office in Honolulu to request for assistance. Eventually a US Navy P-8 aircraft flew out of Japan, refueled on Guam, then headed straight to the last known area where the mariners were thought to be located.

The Coast Guard Sector Guam, however, drew up the search and rescue map for the Navy, the local government and other volunteer commercial vessels to follow. The program is called SAR OPS.

McCandless says the call came in Wednesday afternoon. The Navy P-8 team arrived in the search area Thursday around 2 pm and finally saw the stranded men waving their life jackets in the air about two hours later.

The mariners were stranded for about three days, says McCandless.

“The only thing we know that they did was they organized the palm branches into the word ‘help’ there on the island,” McCandless notes.

“Fortunately they had life jackets which really helped them out a lot because not only did it help them make it to shore safely but they were able to get the attention of the air craft with waving them as well,” explains OS2 Jamie Howell.

As soon as the mariners were located, contact was made with the FSM government which then sent a rescue boat to fetch the men and bring them safely back to the island of Pulap. Coast Guard Public Affairs Officer Lt. Cliff Graham says they often do education outreach programs in Chuuk and in this situation, it definitely helped save the men’s lives.

“We do education on border safety and survival at sea. Some of these efforts we’ve actually handed out PFDs and life jackets to the locals and we also paint the inside of their vessels orange so air craft can easily spot when we’re conducting a search and rescue case,” says Lt. Graham.

“[They did] a great job. The interaction between the different teams, whether it be Navy, Coast Guard, FSM, working together as one team,” adds Lt. White.