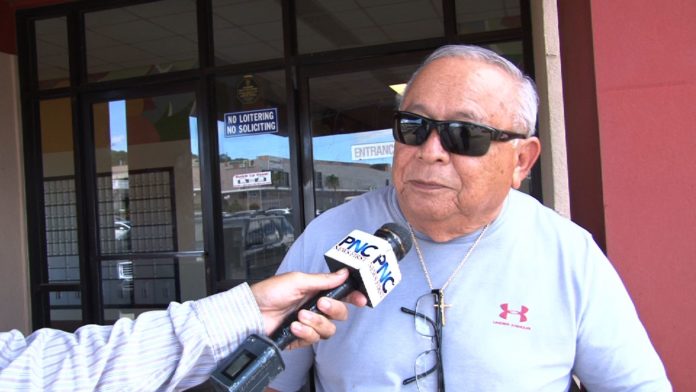 Guam – PNC took to the streets to ask members of the general public about their thoughts on the impending 25% increase to the business privilege tax and the 2% sales tax that will start in October if the governor signs bill 248 into law as he has said he would.

“I am in favor of a sales tax. I think it’s less burdening on everyone. I’d rather see that than people lose their jobs or pay cuts or 32-hour work weeks,” said Barbara Gilman.

Albert Marquez has been on Guam for 40 years. All his children were raised here and he thinks now is not a good time to raise taxes.

“A lot of people have two jobs. They’re trying to meet ends they live paycheck to paycheck. I think they should think more before they do that it could be the last resort maybe,” said Marquez.

“People have said there is no fat to cut. Do you think there is fat to cut?” asked PNC.

“I would just prefer that they enforce the traffic laws to generate the revenue needed because you see all these red-light runners that’s a lot of money you can collect. I’m not for a tax increase that’s really a last resort a lot of people live on limited incomes so it’s not gonna do them any good,” said Earl Garrido.

“Do you think the government can do a better job of cutting expenses?” asked PNC.

“What we have now with the GRT, with all the exceptions and everybody who’s exempt from paying it, wholesalers and all these people. In other words, it doesn’t make it practical and that is why we have a shortfall. If the GRT was even across the board and fair it would be more than enough but the exceptions is what makes it bad. Now we do need more monies to come in and I believe a sales tax which is what all the small businesses are really doing right now,” said John Bouchard.  “They charge you the four percent—in other words they treat it like a sales tax so let’s make it a sales tax. Make it a 5% sales tax and drop the GRT down to 2 percent the people with the exceptions keep their exceptions and its more fair across the board.”

“What do you think about increasing taxes this proposal?” asked PNC.

“It’s fine. The economy is going down what can we do?” said Alex Redoblado adding, “I think it’s legitimate.”

“What do you think about this proposal that the senators will be voting on to create a one percent business privilege tax increase and a two percent sales tax?” asked PNC.

“I think it’s pretty good. It’s good for Guam and Guam will benefit from it. Why do you think it’s good? Its good because more money will be coming in,” said Ricardo Garrido

“My thought is that it’s just too much increase. Power water and then now the tax goes up and then we go out and shop and buy stuff and it goes up again by a certain percentage. So, for the people that are middle income it’s gonna be hard. It’s gonna be hard. They should’ve planned for this thing they know that the president is trying to get a tax break. They should’ve planned for this ahead of time not right now. Now they’re putting the pressure on each other as an excuse. So I don’t know. I’m really tired of this nonsense,” said Ike Camacho.

“I’m pretty sure if they really look at it but I think it’s a game of bluffing who’s going to get what,” said Camacho adding, “I hope that those legislators can really think twice again. Because how much more can you tax the people out here? Other than they should plan and cut their fat selves first and then show us, show us first in good faith.”

People like Marquez say they’re getting ready to cut their personal budgets.

“I guess the people, if that thing happens, they’re just gonna tighten their belt again and their belt’s already tight,” said Marquez.

Lawmakers passed the bill 248 or the BPT and sales tax measure on Thursday afternoon and now it will head to the governor’s office for his action. He has indicated previously that he will sign the bill into law.