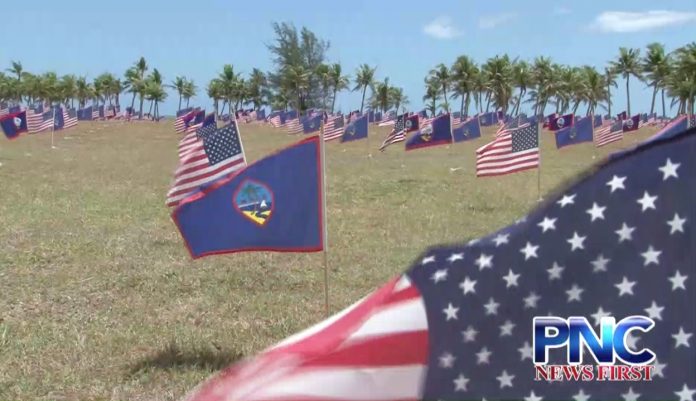 The flags will be on display at Asan until Tuesday.

Guam – Every year, to honor the Men and Women who lost their lives fighting for Guam and the United States, Thousands of Guam and US flags are placed at Asan Beach.

Each flag placed at Asan beach this Memorial Day represents more than national pride and symbolism, it represents sacrifice and gratitude to our men and women in the armed forces. Each Guam flag represents the 1,170 Chamorro people who died during the Japanese occupation.

The flags are placed every year by the War in the pacific National Historic Park. According to the war in the pacific, each US flag represents the 1,880 U.S. soldiers, sailors, airman, coast guard and Marines who were killed during the 1941 Japanese invasion and the 1944 battle to liberate Guam.

All in all, over 3,050 Guam and U.S. flags occupy Asan Beach until Tuesday.

But what does Memorial Day mean to those who continue to fight for the US and Guam? Peter Driscoll is a Cadet in the US Coast Guard and a self-proclaimed ‘Military Brat’ with both parents being Naval officers.

“Memorial day means a lot of things to me, growing up I was a military brat, so I’ve seen firsthand what military life does to families and now that I’m in the service, it’s a great opportunity to reflect  on some of the sacrifices that we have to make to be able to have this ceremony,” said Driscoll.

Driscoll works on the USCSG Sequoa. While on Guam, Driscoll and the US COAST GUARD helps ships bring supplies to neighboring islands that are in need such as Saipan in the aftermath of Typhoon Soudelour.

But being on Guam for Memorial Day is a little different because of the direct impact WW2 has on the area.

“It puts it in a more of a big picture perspective here, you don’t really get a chance to see places like Asan beach with all the flags behind us that you do here in Guam, it really highlights some of the sacrifices people have made” said Driscoll. “I can only imagine what they went through back in 1944, landing on the beach, it’s much different from today I’m sure.”

The flags will be on display at Asan until Tuesday.