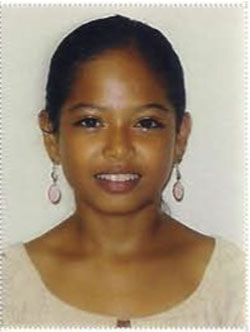 Guam – A Midwestern family has renewed their support for a Micronesian girl attending a small private school thousands of miles away in the State of Yap.

Orpha Hapdei is a seventh grade student at Saint Mary’s School in Colonia. Her family is from the Atoll of Ulithi, a remote outer island of Yap, Micronesia.

Orpha began attending St. Mary’s in 2011, through the Leona Peterson (1926-2011) Memorial K-12 Scholarship. The scholarship pays for three-fourths of her tuition and expenses at the private school in Yap’s capitol city “Colonia.” The money was raised entirely by the descendants of Mrs. Peterson. This last Christmas, the family committed to do the same for the 2012-13 school year.

Leona Peterson was native of Waterloo, Iowa. She led the Department of Aging in the Trust Territory of the Pacific Islands (TTPI) during the late 1970s and early 80s. At that time Micronesia was one part of the larger US-administered TTPI which spanned the Central Pacific. In the 1980s, the region transitioned to political independence. Today, Yap and its outer islands comprise one of the four Federated States of Micronesia (FSM).

Following her death, Leona’s son Paul sought a way to remember his mother’s legacy by supporting the islanders whom she spoke so lovingly of. He reached out to Habele, a small US-based charity that provides scholarships to low-income children across Micronesia The group also funds after school projects and donates school books to students and classroom teachers.

Peterson gathered financial commitments from family members living across Missouri and Iowa. “As the holidays approach this year I was struck with a notion. I would like to keep the named scholarship going year over year,’ says Peterson. “To that end instead of sending out gift baskets to family and friends I’ll make a donation to Habele in their name for the Leona Peterson scholarship fund.”

Habele worked with educators and local volunteers in Yap to select Orphai as the initial recipient of the Peterson Scholarship. According to her sixth grade teacher, Molly Walag, Orhpa earned a GPA of 3.57 for the 2011-12 school year. Her mother proudly mailed a copy of the girl’s honor roll certificate to Habele and the Petersons, who’ve sent a post-Christmas check to Habele for next school year’s tuition.