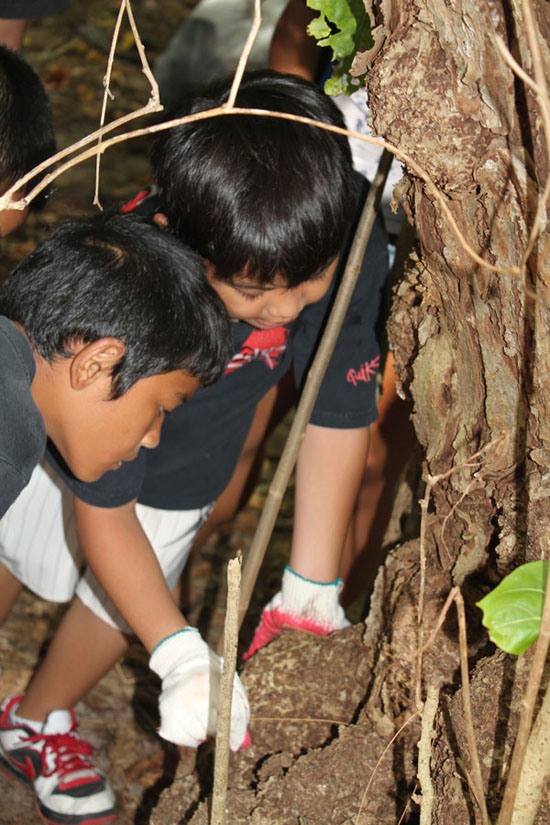 Guam  – Fifth grade students from Merizo Elementary connected with Guam’s endangered Ko’ko’ habitat and caught a glimpse of a rare ko’ko’ nest that hatched only days previously during an environmentally focused fieldtrip to Cocos Island on April 10.

Merizo Elementary School partnered with Guam Department of Agriculture, University of Guam SeaGrant, and the Cocos Island Resort for a day of learning about Guam’s native species and habitat.  Forty fifth graders and enjoyed a nature walk on Cocos Island and learned how endangered ko’ko’ birds have been tracked via telemetry since their release in November 2010.  Using telemetry eleven nests of the secretive ko’ko’ have been located and eight chicks have been seen or heard since the release.

Native lizard species that are limited in numbers on Guam were caught, identified and released.  Locally endangered såli (micronesian starling) were seen and heard throughout the day, as well as hundreds of nesting seabirds.

In an effort to keep the habitat clean for all of Guam’s species, the students and partner organizations collected three bags of aluminum cans for the Merizo Elementary School iRecycle collection program; two bags of plastic bottles and glass, as well as four bags of miscellaneous trash.