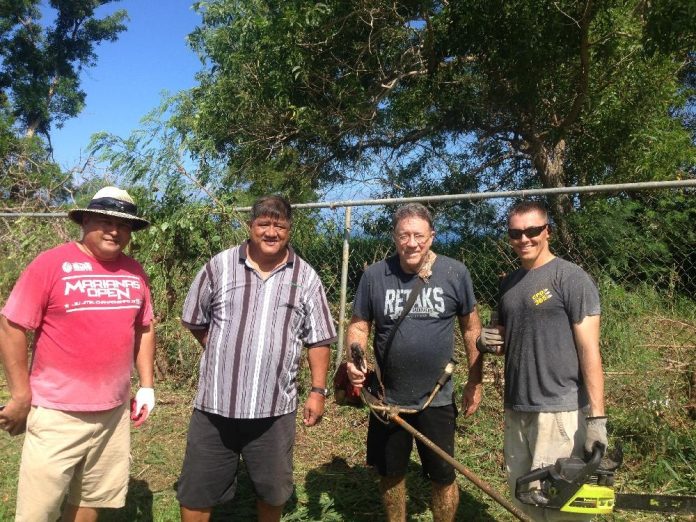 They’re almost done putting up the new fence and now just need funding for the lights.

Guam – A long-time Merizo resident Dave Sykes had a vision of bringing the old softball field back to life after he saw kids waiting around and taking turns using the only basketball court in the village.

Sykes says, “I saw maybe 50 kids down there. They had half of the basketball court, they were playing basketball and the other half they were playing soccer. There was about 30 kids on the bleachers waiting for their turn. So I said there has to be a better solution to this.”

With the help of the Merizo Mayor’s Office, the U.S. Navy Seabees, Senator Jim Espaldon, and community partners, they’re on their way to making the huge softball field next to the Merizo Elementary School safe to play in again.

Sykes explains, “I talked to some friends of mine and community organizations and we started raising money.”
Senator Jim Espaldon explained his part in the project. He says, “When Dave and the mayor asked if I could help out in the project. It happened right before I spoke with Captain Andy Anderson from the Navy. They were trying to figure out how can relationships improve between the military and the civilian community. I said ‘well there’s a project in Merizo I’d love to see if you can help.”
Navy Seabees Joseph King says, “As far as the Seabees goes, we try to focus more on the construction aspect so once we found out that the softball field needed repairs. We came out here, checked it out, and it was something in the scope of work that we could do. So we thought hey it’s a way to support the community, give back for their gracious support of having us out here.”
Working hand in hand over the past couple of months, the grass in and around the field has been cut and a new fence is almost up. The only item left missing to complete the baseball field are the lights.
Sykes explains, “Now that we have the fence, it can be used on daytime or the weekends, but the big expense is going to be lighting. Between Umatac, Merizo and Inarajan, there are hundreds of kids, all ages. There are even adults, we used to have sports teams, but they just gave up because they have to drive so far to play.”
Merizo Mayor Ernest Chargualaf says he hopes this project will come to fruition soon. He says, “So the kids in the community and even kids from the neighboring villages can come and use the facility here. At least we’re doing something positive so the kids have somewhere to go.”
If you would like to help with or donate to the project, visit their website at www.chamorro.net