A Michigan man is now free after being held in isolation on Guam for a supposed positive COVID-test result.

This story made national headlines Friday and the saga captured the attention of so many on Guam over the weekend.

There was even a hashtag for his plight, called #FreeMontae. 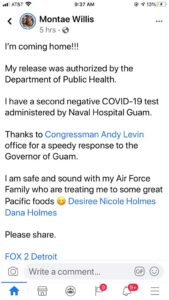 It all began with Montae Willis questioning his positive test result issued by Guam Public Health, saying everything except his name were incorrect; his birthday, his address and even his race were wrong.

He believed he was being held wrongfully in isolation in a case of misidentification.

Guam Public Health issued a statement on Saturday saying they are aware of the claims and had made Willis an “offer” but the details of that offer were not released and according to Public Health, he declined it.

On Sunday night, a post on the 32-year-old’s Facebook page indicated that his release was authorized by the DPHSS after a second negative COVID-test from the Naval Hospital.

Willis is a Marine Veteran who had come to Guam with the hopes of securing some contract work with the Andersen Air Force Base here.

He was scheduled to fly out of Guam Monday.