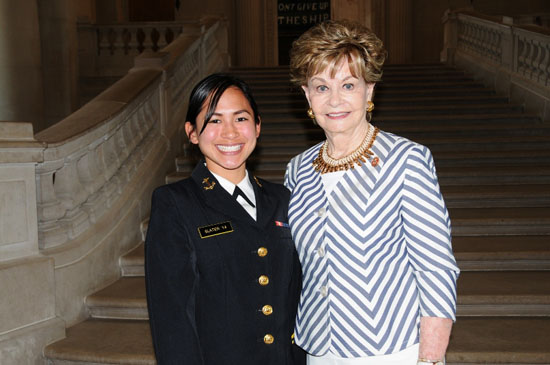 Guam – Congresswoman Madeleine Z. Bordallo has announced that Riacca Slater, a Midshipman (MIDN) at the U.S. Naval Academy in Annapolis, Maryland, was selected for Team USA’s Women’s Rugby team at the World University Games in Kazan, Russia, in July.

Riacca is a second class midshipman, or a junior, at the Naval Academy, and is majoring in political science with a minor in Japanese. She is the daughter of Mr. and Mrs. Roger Slater from Ipan, Guam, and was nominated to the U.S. Naval Academy by Congresswoman Bordallo.

[Congresswoman Bordallo meets with MIDN Riacca Slater during her visit to the U.S. Naval Academy earlier this month.]

“I congratulate Riacca on being selected to be a part of the USA’s Women’s Rugby team at the World University Games,” said Congresswoman Bordallo. “Riacca is an accomplished athlete and a hardworking Midshipman who balances the rigors of her academic and military requirements with her participation in sports. She is a great team player on an outstanding USNA women’s rugby team and we are proud that she was selected for Team USA this summer.”