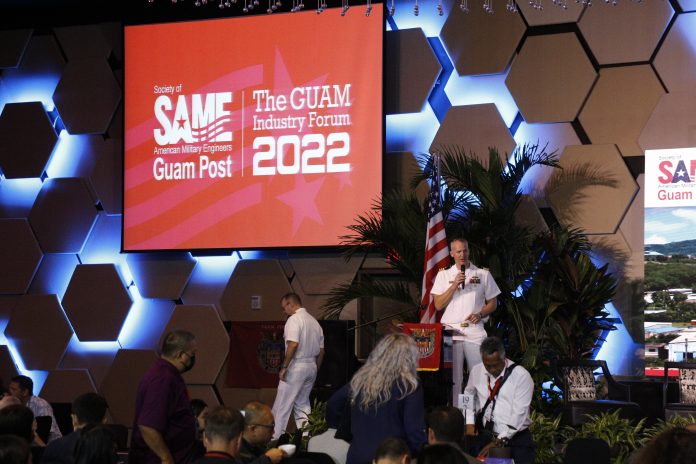 Is Guam ready for the military buildup?

The military build up is rapidly progressing in Guam. As the island prepares to bring in 10,000 Marines from Okinawa, the Department of Defense is preparing for a smooth transition by working with Guam’s different industries.

The Guam Industry Forum wrapped up its 3rd and final day yesterday afternoon.

From Monday to Wednesday, businesses throughout Asia, the U.S., and the Marianas came to the Dusit Thani Resort for the annual trade show event.

The military build up on Guam seemed to be the over arching theme of the forum.

With this, the Department of Defense expressed what Guam can expect in the coming years as military activity ramps up on the island.

In turn, local agencies shared how their body is prepared to take on the demands of the build up.

On day two of the conference, Guam International Airport Authority Executive Manager, John Quinata, gave attendees a glimpse of how the airport can benefit military activity.

“We are a vital linkage to support commercial aviation uses like military,” says Quinata.

“We’re an alternative support airport for military activity and training exercises. We stand ready to serve.”

Over $11 billion is projected to flow into Guam and the Pacific region through new military and commercial projects. This is anticipated to happen over the course of the next 5 years.

After her brief meeting with President Joe Biden yesterday night, as the president stopped on the island on his way back to D.C., Governor Leon Guerrero said in a statement:

“In the years ahead, we will see more involvement and investment from the United States in the Indo-Pacific.”

She goes on to say that Guam will support the U.S.’s economic expansion, sustainable development, and international security.

According to Charles Hazzard the Third, President of the Society of American Military Engineers Guam Post, millions of dollars in military contracts have already been awarded to Guam businesses.

Guam is expected to see the force flow of Marines from Okinawa to Guam in the next decade. While the relocation isn’t scheduled to start until 2025, Guam’s businesses and real estate market is readying the island for the move.