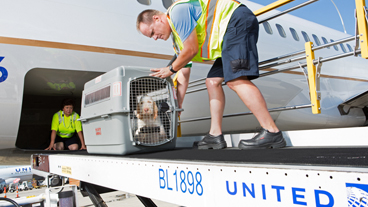 Guam – United Airlines has confirmed that it is temporarily halting its PetSafe program for Guam as well, which allows for pets to travel in the cargo compartment of commercial airliners.

In a statement to PNC, United Corporate Communications said effective immediately they are halting the program as they conduct a review of their policy and expect to be done by May 1.

The suspension of the program is causing some problems for military families stationed on Guam who rely on the PetSafe program to ship large pets off island, especially after Delta Airlines pulled out of Guam, leaving United Airlines their only option. Several military personnel are now concerned that pets will end up stranded here.

The suspension of the program comes after reports of a puppy that died after its owner was ordered by a United Airlines flight attendant to store it, in its crate, in the overhead compartment.

United tells PNC that the suspension does not affect pets that travel in-cabin and in fact have updated its policy to include the issuance of bright-colored tags to better identify pets in cabin.