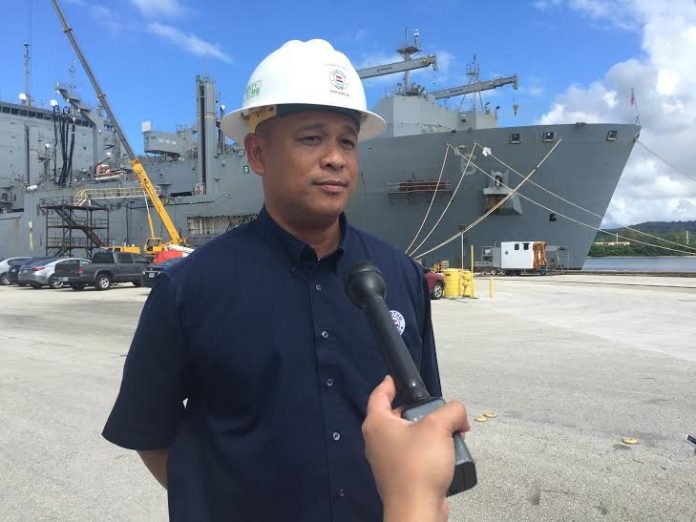 Guam – The Navy is happy with the work that Guam’s ship repair facility has been doing. The facility is now being operated by the Cabras Marine Corporation and today the Navy showed PNC a ship that Cabras Marine is currently fixing.

The c/o of military sea lift command says they are pleased with the work that Cabras marine and Guam’s ship repair facility are doing on the USNS Amelia Earhart. “Cabras Marine has been doing excellent work since the ships arrived and we look forward to continuing to do good work with them in the future,” said Military Sea lift Command C/O/ Commander Joseph Casale. This work includes some routine repairs to things like tanks and systems upgrades but it also includes some structural repairs. These structural repairs involve replacing some sections of the ships hull that were damaged. “I think what is illustrated here is when a ship does sustain damage out at sea it can come to Guam to get work done and get repaired here because this is the closest place to where we operate which is out here in middle of the Pacific,” said Casale.

In fact the Cabras Marine ship repair facility is the only American Integrated Maintenance ship repair facility in the Western Pacific. “I think the public should know that Guam has a very capable ship repair presence on island not only for emergent repair such as what we have here but for routine repairs. Currently we’re staffed with up to 232 people who are of various trade capabilities so we can do anything from hull work which requires welders to piping work which requires people like pipe fitters ore even electrical work on the ship,” said Cabras Marine President Joseph Casale. The ship pulled into port in the beginning of January and repairs should be done by sometime in February.