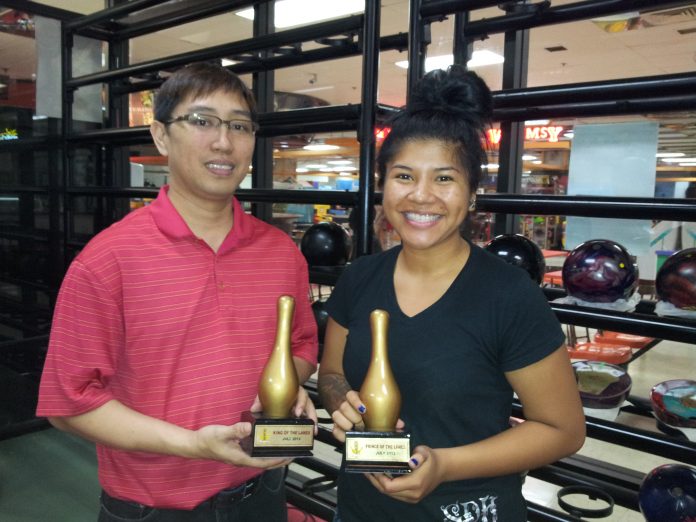 Joey Miranda III and Ray Manibusan battled neck to neck throughout the first eight frames in a rematch of the February finals.  Tables turned in the ninth frame when top seed Manibusan’s Fringe encroached the head pin leaving a 4-9 split that allowed Miranda breathing room going into the final stanza.  Manibusan still had hope as he struck on the first throw of the last frame but was unable to double on the next throw and was left waiting and hoping that Miranda falters in the final stanza.  With the game at the hands of the veteran player, Miranda calmly delivered a pocket shot on the tenth frame hitting a nine pin count which was all that he needed to secure the game and even their title series to one a piece.  A spare and strike in the fill frame sealed Miranda’s victory 201-186 in the battle of the aged.

Manibusan and Miranda secured their finale slots beating out their younger semi-final foes.  Manibusan overcame an early mishap along with and a strong start by 5th seed Jonathan Duenas but took advantage of miscues by the lower seed to dispatch Duenas with a 216-180 decision.  Miranda opened an early lead that he sustained throughout the game eliminating 4th seed Gavin Baker 203-178.

Prince of the Lanes top seed Cherrlyn Catbagan also claimed her title in the same fashion as Miranda. A ninth frame mishap by third seed Paul Kaneshiro opened the doors for Catbagan as she jumped all over the opened frame winning the match 183+32 to 162+35.

In the semi-final round, Catbagan cruised by 7th seed Thelma Arriola 152+32 to 114+36 while Kaneshiro dashed second seed David Esplana’s hopes of making the finals with a 171+35 to 144+27 drubbing of the higher seed.  Kaneshiro earned his entry into the semi-final round by defeating back to back and reigning monthly champion Leody Ersando 144+35 to 113+29 in the quarter final round.