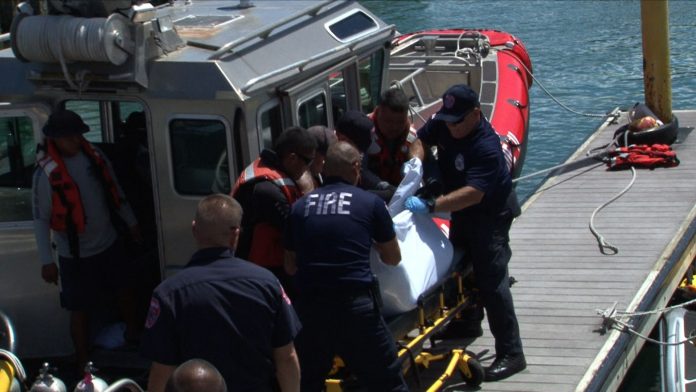 The 22-year-old Japanese tourists was first reported missing around 6:30 last night by Nikko Hotel staff. An autopsy is expected to be performed to determine the exact cause of death.

Guam – The body of a swimmer who went missing in waters off of Nikko Hotel last night was recovered this morning. And it was all through the combined efforts of multiple rescue teams.

The Guam Fire Department got the call at around 6:30 last night from hotel staff at Nikko Hotel.

“We heard that he was, according to beach staff, they were the ones that reported and gave the 911 call, they just noticed that they saw a distressed swimmer. They did their duty and called us. Of course we treat every incident as a serious incident. So we launched our people and we searched all night,” explains GFD PIO Kevin Reilly.

“We got reports that he was a 22-year-old male Japanese tourist. He does have family here,” says Reilly.

Reilly says GFD was joined by the Guam Police Department, the US Coast Guard and the Navy’s Helicopter Sea Combat Squadron-25. He says they continued the search efforts both on land and on the sea. Rescue divers, however, were forced to temporarily discontinue search efforts as darkness fell but Reilly says divers continued their search at day break.

Then at around 10:30 this morning, or about 16 hours after the tourist was first reported missing, divers found a body.

“The missing swimmer was found by our rescue divers in approximately four to six feet of water. He was located by our guys and pulled on board Rescue 2,” explains Reilly.

From there, the man’s body was taken by rescue boat to the Hagatna Marina, then by ambulance to the Guam Memorial Hospital. Reilly explains what water conditions were like around the time the tourist went missing.

“Water was rough, extremely rough. The tide was coming back in. It was real difficult and that’s the reason why we found him this morning because the water was murky and it was a lot of wave action,” notes Reilly.

We asked whether the man was seen or found wearing any flotation device. “No, we didn’t see him in a flotation device. He did have a mask and a snorkel and I guess he was snorkeling when he went over the reef,” Reilly says.

Reilly advises residents and tourists to take extra precaution when swimming in Guam waters, especially in the Gun Beach area. He says it’s extremely important to heed warnings by the National Weather Service on any advisory about water conditions.

“Gun Beach is pretty popular for drownings just because it’s very enticing to see the beach and wanna go out there but we recommend that you do be cautious and listen to the National Weather Service when they do say it’s hazardous. It’s just a reminder for people to stay out of the water and be safe,” Reilly advises. “All the waters in Guam are dangerous to a certain extent, depending on the time of year but that place is dangerous and inexperienced swimmers and visitors that come to Guam have to really respect the water and know exactly what they’re getting into.”