FFII is designed to employ and assess combat power generation and operations in an austere environment and with the exercise completed, Marine Aircraft Group 12 leaders reflect on the execution and outcome of this exercise.

“As with any exercise of this scope, plans for everything from air and ground transportation, to billeting, to aviation support, to coordination with various local and federal agencies must be accomplished well in advance of the exercise in order to ensure its smooth execution,” said Maj. Donald Hall, FFII exercise officer with MAG-12, 1st Marine Aircraft Wing, III Marine Expeditionary Force. “For us, that meant that planning for this year’s Forager Fury began almost immediately after completing this exercise last year. MAG-12 conducted three in depth planning conferences with the participating units, as well as weekly internal Operational Planning Teams (OPTs) in order to ensure the safe and successful execution of FF II. Detailed planning began this summer and will continue all the way through the safe redeployment of all forces to their home bases. This coming January we will conduct our after action reviews and begin planning for next year’s exercise.”

During the exercise, the aviation units flew more than 500 sorties while logging in approximately flight 700 hours while supporting more than 100 close air support missions concluding with more than engaged 160 targets.

“Forager Fury II is an excellent opportunity for MAG-12 to showcase its combat capabilities while integrating elements that are internal to MAG-12, as well as other components of the Marine Air Ground Task Force, from the ground combat element to the logistical support and other aviation elements throughout the Marine Aircraft Wing overseas,” said Maj. Thomas Mondoux, executive officer of MWSS-171. “One of the best parts about the exercise for us, as MWSS-171, is to show how closely integrated we are to MAG-12 and its aviation combat capabilities.”

MAG-12 and MWSS-171 capabilities have expanded exponentially during this iteration of Forager Fury.

“During Exercise Geiger Fury in 2012, MAG-12 and MWSS-171 came in and cleared all of Baker runway in order to land a KC-130J Hercules, the first aircraft to land on the runway since 1947,” said Lt. Col. Howard Eyth, the commanding officer of MWSS-171. “During Forager Fury II, we established a forward arming and refueling point in two locations on the island of Tinian, one at west field and one at north field, where aircraft could come in and rapidly refuel, turn around and launch right back into the fight. Over the course of four weeks our combat engineer platoon and heavy equipment sections managed to clear 161 acres of vegetation exposing all four runways (Able, Baker, Charlie and Dog) and the access roads that connect them. Additionally, we were able to set up a helicopter landing zone on Charlie runway to receive MV-22 Osprey and Navy MH-60 Seahawk helicopters as well.”
During FFII the units involved achieved many goals including providing more than 11000 meals to the service members in Tinian and managing 900000 gallons of fuel throughout Guam and Tinian and performing nine arrested landings in 30 minutes.

“We get a lot of training opportunities here in the Marianas that we can’t as easily obtain in mainland Japan,” said Mondoux. “It’s an excellent opportunity for us, as MWSS-171, to showcase the full capabilities of our equipment and capabilities that are resident in a support squadron. Finally, it gives us an opportunity to operate in an austere environment to fully test the limitations of our Marines and equipment when we operate under a continuous surge. This helps us identify where our frictions points are and forces us to maximize performance of our personnel and equipment.” 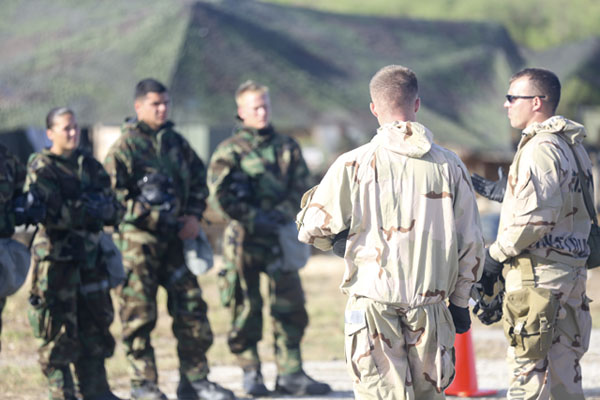 While the purpose of FFII is training and readiness, it is also committed to building local relationships and respecting the local community. In this mission, MAG-12 participated in 14 community relations projects in Tinian and Guam, providing approximately 74 total hours of much needed manpower at each of the locations, at a monetary value of more than $30,000.

“We’ve had the unique opportunity to work with the local officials,” said Mondoux. “They have been very support to our mission and are very encouraged of seeing more Marines in the future and expanding our training opportunities. The Marines have had an excellent opportunity to interact with the public by getting out and doing community relation events, working with kids and touring monument sites with the locals. We have even been able to invite the locals to check out some of the things that were doing here and demonstrate some of the capabilities of the Marine Corps.”

As the exercise ends, the leadership understands that exercises like these are very important as they could all one day be used in real-world situations.

“Professionally and personally, the best part of this exercise was seeing several months of hard work come together into a successful training evolution for all of the participating units,” Lt. Col. Keith Topel, Operations Officer, MAG- 12. “MAG-12 and the other participating units executed well, learned a great deal, and will be ready to incorporate those lessons learned into future iterations of this exercise or actual combat operations.”