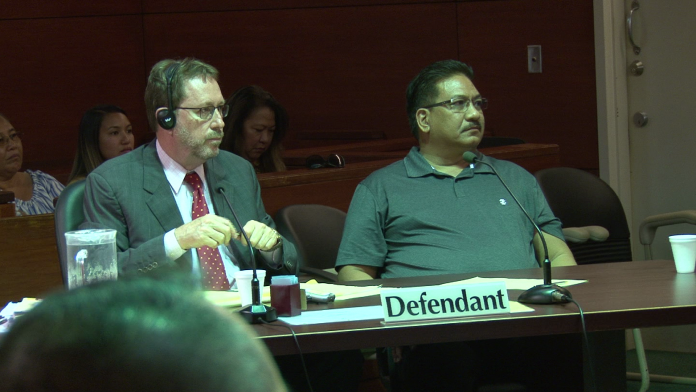 Guam – A mistrial has been declared in the case against former Guam Police Department Col. Mark Charfauros and it appears with this declaration that Charfauros may be completely off the hook.

Charfauros was on trial for official misconduct and obstructing government functions. He was seen on body cam footage berating fellow police officers who were responding to a call of illegal fireworks. The incident happened on December 24, 2016 at a neighborhood in Agat. Across the street from the home police were attempting to raid was a party Charfauros was attending.

“I had reason to believe that the colonel was affiliated with the Agat Blood Town gang.”

That is the comment that lit the fire, taking down the whole case. It was the testimony of police officer Craig Calvo, the first and only witness who had the chance to testify in Charfauros’ short-lived trial.

It was a comment elicited by the prosecution during direct examination when officer Calvo was questioned about why he believed Charfauros ordered officers to discontinue their police work.

The comment struck a chord with defense attorney Randy Cunliffe who immediately motioned for mistrial after officer Calvo’s testimony.

“Had the defense been properly notified by the prosecution to use such evidence to establish motive, Mr. Cunliffe indicated that he would have filed a motion in limine or other such pre-trial motion to exclude the evidence which the court would have been able to address prior to trial rather than during trial,” noted Judge Maria Cenzon as she was announcing her decision on the motion in court Thursday.

But the jury had already heard the inflammatory evidence with out a limiting instruction and Cunliffe was not able to question the potential jurors regarding any effects the “Agat Blood Town” evidence might have had on any of the jurors.

“As the government failed to provide notice, the court finds that the defendant has been denied his due process rights. So in this circumstance, what is the proper remedy? The court is not convinced that the government was unaware that officer Calvo would testify that quote, he had reason to believe that the colonel was affiliated with the Agat Blood Town gang,” continued Judge Cenzon.

Cenzon stated that it is evident in the discovery that the interview with officer Calvo by the prosecution indicated the officer believed Charfauros was gang-affiliated.

“Thus, the claim that the prosecution did not know that officer Calvo would testify at trial that there was any affiliation is naive at best and dubious at worst,” Cenzon asserted.

The court found that the evidence of any gang-related activity falls within the requirements of 404B evidence which requires proper notification of use of such evidence. The court further found that any jury instruction to right the prejudice would not suffice as a remedy. For these reasons the judge granted the mistrial.

While the case was not dismissed by the judge, the Fifth Amendment may bar the prosecution from prosecuting further. According to the Fifth Amendment, as it pertains to double jeopardy, if a trial ends because of prosecutorial misconduct, the proscription in the fifth amendment most commonly prevents a new trial.

Meanwhile the prosecution is waiting to see the judge’s order in writing to determine their next course of action.