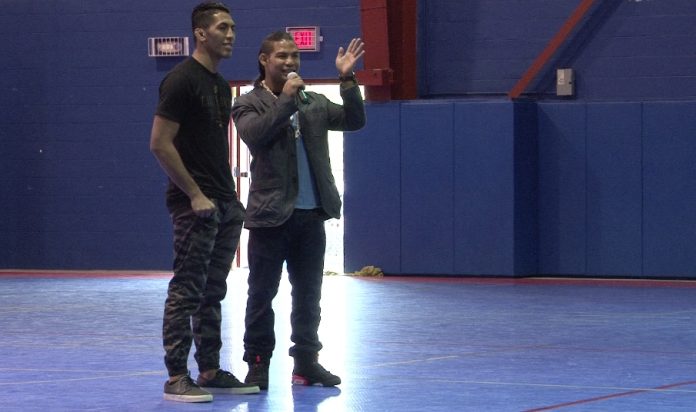 In response to what seemed like a growing trend of students posting fight videos online, Guam Crime Stoppers, the Department of Education and local athletes will be touring schools around the island to spread the message about positive behavior.

In the last year, a rash of school fight videos went viral online and shocked the community.

As a result, the Guam Crime Stoppers and the Department of Education teamed up with local role models Mixed Martial Artists Babyjoe “The Juggernaut” Taimanglo and Kyle Aguon to end violence among students.
“You know how many likes you get? Zero. I don’t want to see people like you guys get hurt, I don’t want to see my people get hurt, fighting each other, hurting each other,” says BabyJoe.
Baby Joe along with other local athletes are visiting different schools around the island and speaking to students in hopes of spreading the message about positive behavior.
He tells students, “There’s so much potential in each and every one of you guys. I mentioned before, you guys can be future leaders, our future athletes, representing the island of Guam.”
Students were engaged as their role models spoke.
BabyJoe says he hopes to inspire the uninspired, “We all need to work together as one, one island, one people  so that our future not just for you guys but for your kids can have something good to look forward to.”
The group visited Southern High School and Oceanview Middle School today. Next on their list are Tiyan High School and John F. Kennedy High School tomorrow. Then they’ll head to M.U. Lujan Elementary and George Washington High School on Thursday.