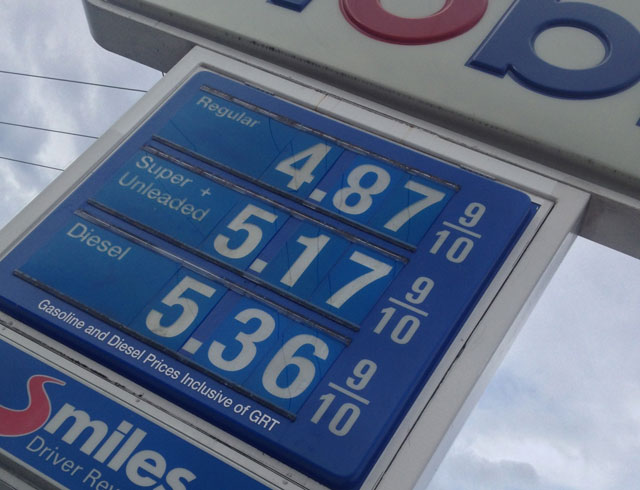 Guam – Mobil hiked the price of regular unleaded gasoline by 15-cents overnight to $4.88 a gallon.

At mid-day 76 had followed suit. And Shell had raised their price by the same amount by Saturday.

Guam’s 3 fuel suppliers walk in lock-step on their pricing, rarely do prices differ, and never for long. The 3 companies do not discuss their pricing decisions.

Guam’s gasoline is brewed in Singapore from a combination of crudes. One of the Asian benchmarks is Malaysia’s Tapis crude which has risen only modestly this month from the US$111 dollar range on May 12 to just over US$113 dollars as of yesterday.

SEE a chart tracking the price of Tapis on AIP.com.au HERE

And the price for regular unleaded in the mainland has been easing, down 4 cents in the past month according to the Triple A Daily Fuel Gauge Report.

However, Bloomberg reports that gasoline futures climbed in New York Thursday after a tornado damaged a Louisiana refinery and forced a crude oil processing unit to shut down. The Bloomberg report also points out that U.S. crude oil inventories have fallen.