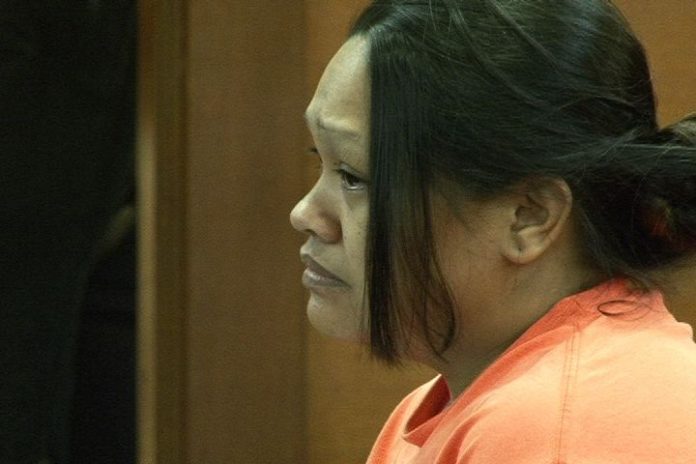 Melenie Borja is charged with manslaughter and is held on $25,000 cash bail.

Guam – Horrid details in the case against Melenie Borja who was charged with manslaughter in the death of her newborn baby. Borja’s home was “not conducive for children to live in” and police also found drug paraphernalia.

“Before the hearing began the court had an opportunity to review it and agreed that there was probable cause to charge you in this crime,” announced Judge Alberto Tolentino.

No furniture, cockroaches everywhere, no food and a foul smell. These were the living conditions in the home of Melenie Borja and her 8 children, according to a magistrate report. Borja is accused of neglecting her newborn baby Joziyah. Last Wednesday, Joziyah was taken to GMH by Guam Fire medics, but when he got there, he was already dead.

At the time, “the baby weighed approximately 6.6 pounds and appeared to be malnourished and neglected. The infant appeared to have sores on his head and facial area,” the report states.

Police were then called in to investigate. In one of the bedrooms, they found drug paraphernalia and “multiple pieces of foil known to be used in smoking ICE” or methamphetamine. The only furniture they found was in another bedroom, mattresses to sleep on. During questioning, Borja acknowledged the drug items but claimed they weren’t hers.

She was charged with manslaughter as a first degree felony. She’s being held on $25,000 cash bail.

Borja told police that the night before Joziyah died, she fed him baby formula around 8 pm. She woke around midnight and says she fed her baby another bottle. “Her dead child finished the bottle and went back to sleep,” the report reads. However, police say they found no baby formula in the home and only found 2 diapers. Police also found no food in the residence despite Borja’s claims that she receives $1,350 in food stamps every month.

Borja’s mother and grandmother never got the see the infant, police say, he was always wrapped in a blanket. The only person who observed the baby was Borja’s friend who told police that had she suggested to Borja to have the baby seen by the doctor, but Borja became angry with her.

And police say Borja was also abusive to her other children, ages 1 to 13. They told police that their mother would spank them with a slipper or belt, including her newborn. They also said they’ve witnessed their mother yell and shake her newborn whenever he cried. The children also corroborated Nicholas’ statement that Borja was always locked in the smoking room with several men.

Borja is scheduled to appear in court in October 13 at 4 pm.