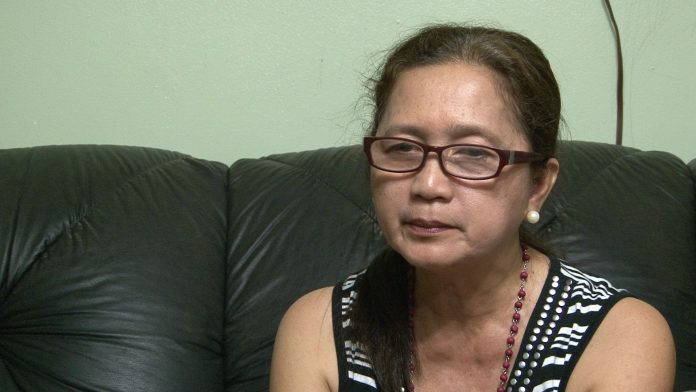 Jerelyn Piolo says even as a kid, Officer Elbert Piolo was so friendly, she knew he would grow up to be loved by so many.

Guam – PNC sat down with Officer Bert Piolo’s mother, Jerelyn Piolo, who shared with us some of her favorite memories of her son.

Losing a child is never easy and for Jerelyn Piolo, who lost her son on Monday, the tragedy is heartbreaking. But Elbert Piolo was such a loving and happy person that Jerelyn says the outpouring of love and memories of her son have helped her to cope with the loss.

“I was really surprised because every person or every individual that I meet that knows Elbert, they always have a good things to say about him,” says Jerelyn.

Even as a child, Jerelyn says she could already tell that Bert would grow up to be loved by many because of his friendly personality.

“I can testify on that because when he was small, when we go home to Philippines, people that he doesn’t know, he would say ‘Hi, hi!'” explains Jerelyn, waving her hand in air to demonstrate how Officer Piolo used to do it as a child.

“I said, ‘You’re just like a candidate,'” Jerelyn adds, smiling as she recalls Officer Piolo as a child. “He’s really friendly.”

Jerelyn says she was initially worried for her son when he announced that he wanted to be a police officer 16 years ago. But she could see how passionate he was about wanting to serve the public.

“I didn’t know that he enrolled himself in GCC without my knowledge and he just told me that he enrolled and asked me for a payment for his tuition. So what can I do? He’s already there,” she recalls. “He said, ‘What’s wrong with a police man? I just wanna help.’ So I just let him go.”

Jerelyn and her husband were extremely proud of their son as he climbed the ranks within the Guam Police Department. But she never thought those days would come screeching to a halt. She tells us about the day she lost her son.

It was around 4 in the morning she was told something terrible had happened to him. So she and her husband rushed over to the emergency room.

“I even call God to send miracles,” she says, sighing.

Her message to everyone who’s sent their prayers, love and support: “It’s really overwhelming, the friends and supporters of Elbert. I just want to thank you guys for your support and for your friendship. Now he’s happy in heaven and right now he’s watching over us.”