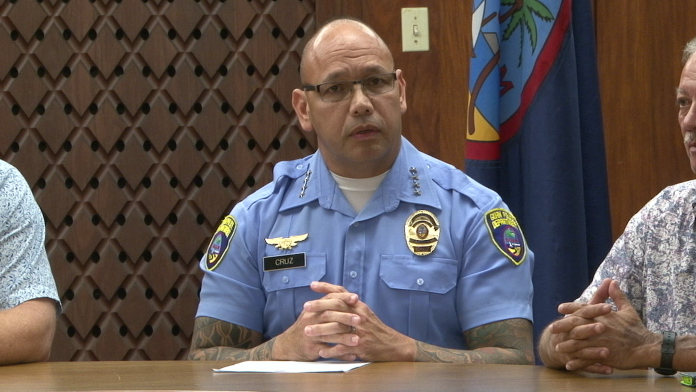 Guam – Despite what you may think about crime in more populated areas, the village of Tamuning actually receives more police calls than the village of Dededo which is the most populous village on island.

The surprising statistic was revealed during a signing ceremony for an executive order to beef up police presence in certain parts of our island.

The new task force was created to in anticipation of a spike in crime rates during the holiday season. The focus will be on crime suppression by augmenting the Guam Police Department with public safety officers from other executive branch agencies. To be exact: two conservation officers from the Department of Agriculture, two Parks and Recreation officers, two Airport Police officers and two Port Authority police officers. The remaining 17 officers from GPD will be tasked to the Mandana 2.0 Crime Suppression Task Force.

“We all want more police officers, we just have certain limitations and it becomes a numbers game. This is an ability now to expand our manpower resources and utilize them in areas we believe are critical and we are seeing some issues in regards to criminal activity,” said Governor Calvo.

The officers will be assigned to patrol the villages of Tumon-Tamuning and Hagatna with the ability and authority to expand their presence in other villages should the need arise.

So why not focus on Dededo first since it’s the most populated village of Guam?

“One would think that up in Dededo, because it’s more populated, there’s more crime up there. The reality is what’s happening in Tamuning, we’re seeing that the calls for service happening in Tamuning seems to be a little bit higher based on the statistics that we’re analyzing. So we’re looking at that, we’re looking to put this task force in the tamuning area, in the Hagatna precinct area where we’ve seen some of the calls for service climb in those particular areas,” said Chief of Police J.I. Cruz.

Governor Calvo says no additional funding will be needed for the Mandana 2.0 task force as the officers are simply being reassigned. The new task force will take effect this Sunday.