Last Friday, the Tumon-Tamuning Precinct Command officers responded to a disturbance at about 12:08 pm at Veronica Way in Jonestown Tamuning and arrested the suspect who was later identified as 43-year-old John Richard Bordallo Bell.

According to the magistrate’s report released Monday, when GPD arrived on the scene and met with Bell, four women ran out a side door of the residence and told GPD that Bell allegedly kept them hostage and that he would “cut off their hands and bash their heads.”

The report states that Bell allegedly prevented the victims from calling police and allegedly assaulted one of the victims by slamming her head against a desk.

Bell is an attorney licensed to practice law on Guam and in California specializing in labor and employment law, personal injury, medical malpractice, consumer law, and general civil litigation.

Hours prior to his arrest Bell was on air with NewsTalk K57’s Patti Arroyo at 9:15 am to talk about his opinion on white-collar crime, also saying he was being targeted and experiencing backlash and retaliation as a result of voicing his concerns.

Bell repeatedly states in the interview, “I’m just an attorney, not law enforcement.” Bell mentions how people he says to be in a higher position and influence or power than him … would defeat his efforts in helping his clients.

“I wanna be careful, the only reason why I’m not being so specific is that I’m not here to defame anyone or I don’t have to name names if I don’t have to. I’m describing a very broad problem, reaching out to these people who are in very high positions that want to do something but politically they can’t,” Bell said.

He added: “It’s gotten so bad, I am no longer able to help those people at all. Simply because I said some things that were true but you’re just not allowed to say that…”

Bell later said that because of “white-collar crime,” his practice as an attorney has suffered. He notably said that he wants police to see how he operates as a boss and attorney.

“My practice has suffered, I want you to picture this. I’m telling law enforcement to come to my house and I’ll give them a tour, I’m not kidding anymore. I want that police officer and that prosecutor to come to my house, see how I do my job, meet my staff, you think I’m crazy? Talk to my paralegal. My paralegal is right here. She is not nervous. Do you want to talk to everybody? My paralegal who’s not even from Guam, who’s been here for 3 months can tell you everything that I’ve said from an outsider’s perspective and can confirm it. Why do you want the police to come to your house for? Because when I call the police … Remember white-collar crime,” he said.

Bell also allegedly stated to one of the victims that the mafia, government, and senators were out to get him and briefly alluded to it in the interview.

“I went to six senators and I won’t name names. I’m asking for the help of the six senators who did nothing. People met with me, I’m their natural political enemy, privately they know damn well, they know who they are. I came to them asking for help, from the same people that they pretended to help.”

He added: “These senators refuse to do anything… I wanna talk to them and explain to them what happens then they do nothing.”

The magistrate’s report states that there is probable cause to charge Bell with the following: 3 counts of terrorizing, 3 counts of felonious restraint, and multiple counts of assault. 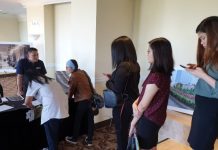