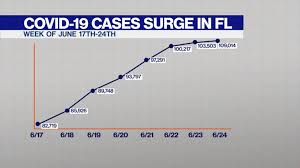 (Fox News) – Coronavirus infections rose in 40 out of 50 states heading into what will be a very different July Fourth weekend, as the virus continues to make a resurgence following weeks of nationwide containment measures that have been re-imposed in many areas amid the upswing.

In four states where outbreaks are the most severe — Arizona, California, Florida and Texas — more than 25,000 new COVID-19 cases were confirmed Thursday. Texas Gov, Greg Abbott, a Republican, ordered the wearing of masks in counties with 20 or more positive coronavirus cases.

He began one of the most aggressive reopening campaigns in May and COVID-19 hospitalizations have quadrupled in the Lone Star State since.

Florida confirmed more than 10,000 new cases Thursday and 325 new hospitalizations in a 24-hour period. Nationwide, the United States reported 51,200 new cases, a doubling of the daily total over the past month.

Nebraska and South Dakota are the only two states outside the Northeast to see a downward trend. Several Northeastern states have seen new infections decline, including New York, Massachusetts, Connecticut, Rhode Island and New Jersey. Officials in Colorado are watching nearby states where infections have increased.

Over the past two weeks, positive test results have doubled in Georgia, Kansas, Montana, Michigan, Missouri, Tennessee, Mississippi, South Carolina and Ohio, while tripling in Nevada. In Texas, the positivity rate soared from 8 percent to 14.5 percent in the same time period.

The uptick has been blamed on many Americans not wearing masks and ignoring social distancing guidelines as governments lifted unprecedented lockdown measures over the past few weeks and slowly began reopening their economies.

In an effort to prevent the further spread of the virus, governments in California and Florida have opted to close beaches during the holiday weekend, along with that of several business sectors.