Most of the 92 passengers quarantined after landing on Guam last Wednesday are still being held in either GovGuam or Department of Defense facilities.

People coming in on the Honolulu-Guam flight were forced into quarantine, after the Department of Defense (DoD) informed Guam Public Health and DoD officials that a service member on that civilian flight tested positive for COVID-19. 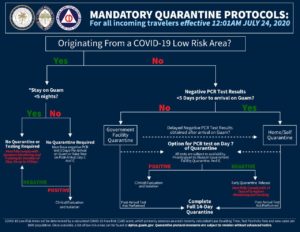 Krystal Paco-San Agustin, the Governor’s Press Secretary, confirmed with PNC News that “high-risk passengers” must quarantine for the full 14-days. She says those are the people who were sitting in a 3-row vicinity of the positive service member; behind, in front of, or to the side of the person.

Paco-San Agustin says some passengers have since transited, likely to Saipan. “If they’re determined to be high-risk, then we’d notify officials there,” said Paco-San Agustin.

The other remaining “low-risk” passengers will follow the standard GovGuam quarantine protocol, with Paco-San Agustin saying, “they can test out of quarantine on Day 7.”

If anyone had negative test results prior to boarding, those results were invalid and everyone had to be quarantined.

Joint Region Marianas Rear Admiral John Menoni, told K57’s Patti Arroyo, that testing before getting on a commercial flight is not required by DoD, as service members undergo 14-days of Restriction of Movement (ROM) wherever they land.

“So this individual got a test, and I’m not sure what drove that logic to get a test but they got a test in Hawaii prior to boarding the United flight. Those test results weren’t available prior to take off. Once they became available, Hawaii Public Health and the military in Hawaii communicated with Guam Public Health and the military community here that an individual was positive on the plane,” said Menoni.
The Commander says there are still knowns about the case of the service member and they’re working through the details now.