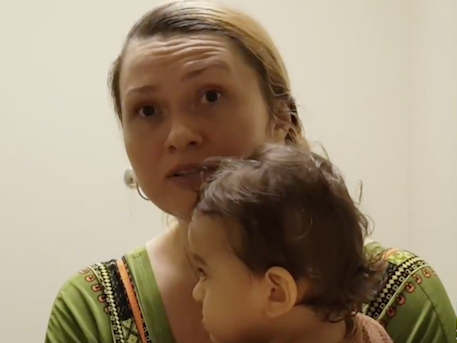 Ekaterina Elyutina is from Russia and says she was not too familiar with how the system works in Guam when she first delivered her baby about a year ago.

Guam – Imagine giving birth to your child at home and then going to the hospital the next day only to be turned away. According to a complaint filed in the Superior Court of Guam, this is what happened to one woman a year ago.

Ekaterina Elyutina had planned the perfect home birth for her son, Amer Adallah, surrounded by candles and classical music playing in the background. It was a joyful experience.

But that experience turned into a nightmare the following day when she set foot at the Guam Memorial Hospital.

“Next day, December 3rd, I took my baby and then we went to GMH. I explained to guards, security guards, that I delivered yesterday and I need to fix my delivery. And the guards answered me that nobody working today go home and come on Monday,” claims Elyutina.

Elyutina is not from Guam and is unfamiliar with the hospital. After being told to go home, she thought that maybe GMH was closed on weekends. With her day old baby in tow, she did as instructed, went home and waited until Monday.

“On Monday he was three days old. I came back and explained to the guys the situation again and they showed me the way to the records department. And there is a lady explained to me that she can not help me and that I have to go to public health,” Elyutina explained.

Turned away for a second time, tired from the birth and unfamiliar with the area, she took a taxi to the Department of Public Health and Social Services Mangilao location which she thought was another hospital.

“They really tried to help me and find a way. They called to ambulance and explained to the guys what happened, what I need. I entered into GMH emergency room–no other way,” she said.

But this was just the beginning of her nightmare as she describes in court documents.

“In GMH they dropped me not in the emergency room, they dropped me in monitor room. So here is picture,” she said as she showed PNC the photographs she took of the monitor room while there. “There is no bed here, is just a table. Is just a table and monitor and chair. I call that my electric chair because third day after delivery, sorry to say, a lady can not sit and the doctor’s dropped me there. One hour we waited there for doctor to come. There is no place to put baby safely. So all the time he will be in my hands,” recalled Elyutina.

For her stay in what she describes as the “monitor room” she was charged for two beds–one for her and one for her son. When the doctor finally came, she alleges that he only spent three minutes checking on her son.

After four hours with her baby in hand and with no place to lay down, she says it was time to pay for the hospital bill, however, she was only expecting to pay a bill of $500. She was not prepared for the bill she was given which totaled $1,183 and this is where things for Elyutina got worse.

“Start to scare me. She know that I am a foreigner and she start to scare me saying that I can not leave island without paying bills; that border officer will drop me in prison, that he will take my baby and drop him in social services and I will be in prison if I do not pay that crazy bills,” said Elyutina of the cashier who processed her.

After being threatened, Elyutina took her claim to court and is now suing GMH for $200,000.

In court, today, GMH requested that the suit be dismissed for failure to be served the documents. However, Judge Arthur Barcinas ordered that both parties go through mediation.