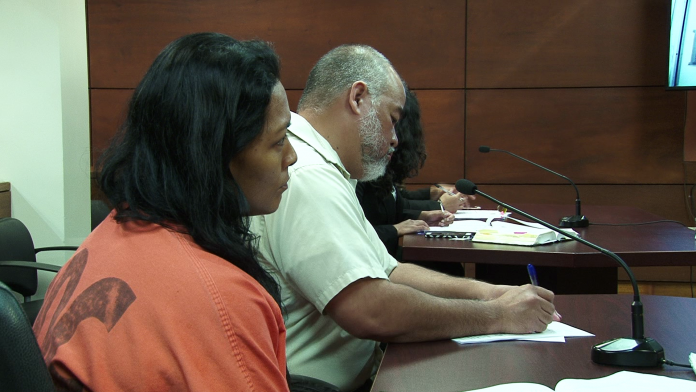 Guam – Details surrounding the events that led to the discovery of a newborn baby boy abandoned on the doorstep of a Dededo home have been revealed in court documents.

The newborn baby identified in court documents as Baby Omapas was only eight hours old when his mother, Naomi Omapas, wrapped him in t-shirts and a towel, placed him in a basket and then abandoned him at the doorstep of David Nguyen’s home.

Following the discovery of the baby, police canvased the area and uncovered information that a woman was seen a few days prior “looking pregnant.”

Court documents state that after abandoning her baby, Omapas walked away from that residence and headed to a local bakery and “bought a can of Mr. Brown.” All this while Nguyen and his daughter contacted police about their discovery of a baby.

Omapas told police that after leaving that bakery, she saw Guam Police Department squad cars driving toward a house in Dededo. But instead of walking toward the police cars, she walked to a nearby store and stayed around that store for the day.

Court documents state that Omapas admitted to smoking ice three weeks prior to giving birth, allegedly telling police that she smoked it to “get away from her problems.”

Her legal counsel, Public Defender Peter Sablan, fought for the charges against Omapas to be dismissed, noting that nothing in the magistrate complaint indicates that she intended to harm the baby.

“Family violence charge, that she caused or attempted to cause bodily injury to another that’s a family member, which is the baby; nothing in the declaration supports that charge. The third charge for possession and use of a controlled substance; she wasn’t found in any possession of any controlled substance. There was a statement that she used drugs. There was no test, any field test, no lab test that indicates that what she actually consumed was in fact methamphetamine,” Sablan added.

This is not the first time Omapas has had a run in with the law relative to child abuse. In 2011 she was arrested after she allegedly hit two of her children with a hanger.

Her next hearing is set for July 19 at 4 p.m. in Judge Alberto Lamorena’s courtroom.