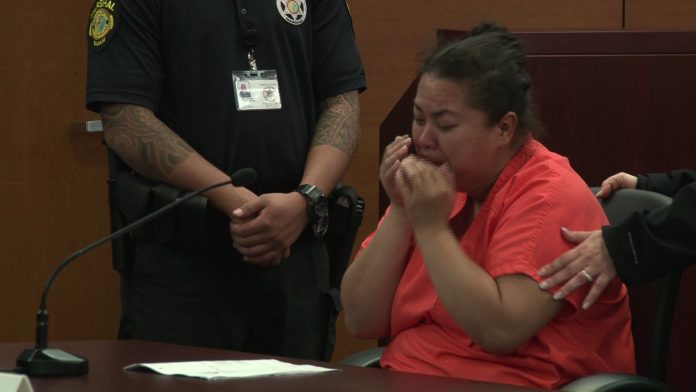 Crissy Jean Manley sobbed in court as Judge Alberto Tolentino warned her that she could face up to life in prison depending on what happens to her son. Meanwhile, the one-year-old child is fighting for his life at GRMC’s ICU.

Guam – Some horrifying details in a child abuse case that’s left a one year old child on life support. The mother accused of burning her baby with a lighter and choking him is being held on $500,000 cash bail and her husband on $300,000 cash bail.

“We received information that a baby had been taken by medics to the Guam Regional Medical [City] to be treated for possible choking on maybe a coin or an object lodged in the baby’s throat. It turned out that the doctors had discovered that it appread that the baby had been abused,” explains Balajadia.

According to a magistrate report, Duenas claimed that he was able to dislodge the coin from his step-son’s throat and perform CPR. But police weren’t convinced that this was an accident.

“We were notified. Criminal Investigations conducted the investigation and brought the parents in last night and interviewed them. Through their interviews, we we’re able to determine that yes, in fact, the one-year-old child had been abused. So we’re looking at burns from a lighter, cigarette burns. The mother is alleged to have put her infant in a chokehold and slap the infant numerous times,” says Balajadia.

The report states that at first the parents tried to come up with different excuses for how the child received burns, such as igniting the lighter to make it hot then placing it close to the baby to teach him a lesson. But upon further digging, police were able to uncover more.

Manley, according to police, admitted to slapping her son’s legs and face. Investigators had Manley re-enact the abuse and they determined that based on Manley’s demonstration, she struck her child’s face with an open palm and not just a slap on the face.

“As to defendant Manley, the people request $500,000 cash bail. As to defendant Duenas, the people request $300,000 cash bail,” requested Tenorio. “In addition to the facts that weren’t in the declaration, your honor, it should be noted that the baby did suffer from internal hemorrhaging and had to go, undergo surgery and subsequently was placed on life support. This is an especially egregious set of offenses committed against a vulnerable victim against a child who is only one year of age. We believe, your honor, the defendants pose a threat to the safety of the victims, as well as the other minors, and other members of the community.”

Judge Alberto Tolentino took note of the one year old child’s situation and warned the parents that they could face more charges down the road.

“Ms. Manley, you are charged with attempted murder,” pointed out Judge Tolentino as Manley began to sob openly in court. “Depending on what happens with the child, you’re looking at a potential 15 years to life in prison if you are convicted. Mr. Duenas, depending also on what might happen to the child, you too might face the same charges.”

Manley and Duenas are also facing charges of aggravated assault, child abuse, and family violence, all as felonies.