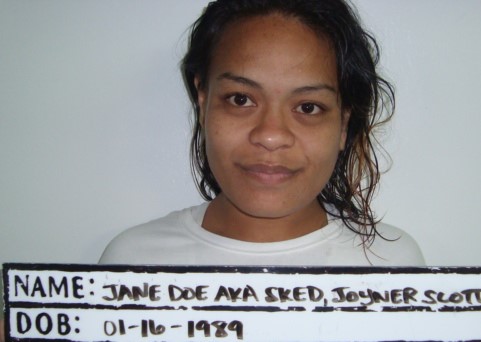 A woman has been arrested after her toddler was found wandering the streets of Sinajana alone.

The magistrate’s complaint against Joyner Scott Sked stated that the child was around 12 months old and was only wearing a diaper when he was found wandering around in Sinajana at around 7:15 a.m. on November 3.

“The child was dirty and outside the fenced-in area of the front yard of the residence. The officer picked up the child and spoke with the homeowner. The homeowner reported that she saw the child trying to push through her fence, in what she interpreted as an attempt to get to her dogs that were in the yard,” stated the complaint.

The homeowner told police that she did not recognize the child and feared for the child’s safety as her dogs can be aggressive. The dogs did not harm the child.

While police were on the scene, a woman identified as Sked, told police that she was the child’s mother.

During an interview, she told police that she believed the child walked out of her home while she slept, further stating that someone left the door and gate open.

However, when police interviewed Sked a second time, her story changed. Police reported that she told police that she last saw her son around 6 am on November 3, and she believed he was sleeping.

The toddler was placed in the care of a family member after Child Protective Services was contacted.

Sked has two other criminal misdemeanor cases against her.

For this incident, she was booked and confined on the charge of child abuse.