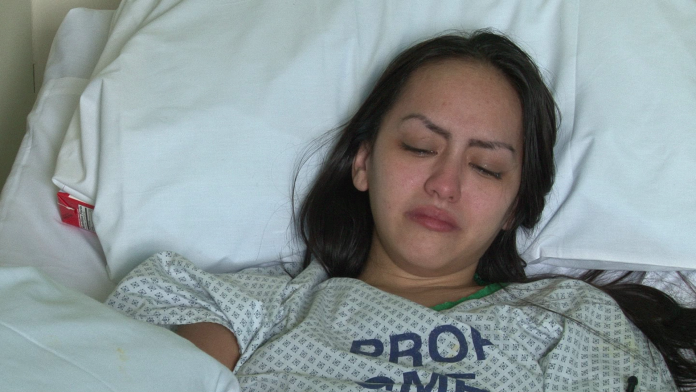 Guam – A young mother is seeking answers about her medical condition that’s forcing a prolonged stay at the Guam Memorial Hospital. She tells us that she’s been there for nearly two months with no clear prognosis in sight, all because of a mistake the hospital allegedly made while she was giving birth.

On May 27, Alissa Nededog was giving birth to her second child, a baby boy she would name Aiden. He wasn’t due for a few more weeks and complications with her delivery forced her to have an emergency c-section.

All seemed to be going well, that is until she was released from the hospital three days later. She began to suffer from extreme pain in her abdomen. So she returned to GMH.

“The doctor said that they found something in my stomach and they didn’t wanna drain it out so they gave antibiotics,” said Alissa.

A few days later she was sent home again. But once again, something didn’t feel right. The pain did not go away.

“The pain was really bad. I couldn’t lay flat or on my sides and I could barely walk. The day they released me I was walking up the stairs to my house and I fell. So two days after they released me I came back and they did a CAT scan while I was in the emergency room and that’s when they found an infection and it got bigger. It was like my whole side,” Alissa said as she ran her hand through the left side of her torso.

That was nearly two months ago. So why is she still here? According to Alissa, despite efforts to drain pus that’s built up from the initial infection, it continues to spread.

“They did a CAT scan again, like a week after and it wasn’t, I guess, that’s when they said that it broke and some of it was on this side,” she added, now pointing to the right side of torso.

Week after week, CT scan after CT scan, it seemed Alissa’s condition continued to get worse. Not long after the infection spread to both sides of her torso, Alissa learned that more fluid built up near her chest area.

“They were just draining and I was getting different answers from the different doctors that I had. Some would say that it’s improving and some will say that it’s not, it’s still big or it’s spreading,” she recalls.

Alissa says doctors couldn’t figure out what was wrong with her or the source of her infection. Finally, after weeks of grueling pain, tests and needles, doctors finally had an answer. It turns out, it’s something that could have been avoided.

“We didn’t get answers until almost a month I was here that it’s from the caesarian-section,” she remembers. “They said that–because it was the antibiotics doctor that told me–he said that he found bacteria from the inside and that the doctor accidentally cut one of my small intestines when he was doing the caesarian section.”

Alissa was told that bacteria had seeped into her intestines causing the infection that’s now spreading throughout her body. To make matters worse, the aggressive regimen physicians have put her on, different IV antibiotics, is also painful, ruining her veins. She’s also beginning to lose her hair.

“My mom’s saying that it’s from having too many CAT scans and I’m already going on my 7th one … it’s like every week. One of the radiologists downstairs, the helpers, told my dad that you can only get four within a year,” noted Alissa.

Adding to all this is the fact that Alissa has not been able to hold her newborn baby boy or spend time with her 3-year-old daughter.

“It’s hard,” she says as she chokes up in tears. “I haven’t got to feed him and I was always happy because they say that I’m close to going home but it always fails and it hurts.”

Alissa is questioning the competency of some of the doctors, saying she believes she wouldn’t be in this dangerous situation if the doctors had properly treated her when they first discovered the infection.