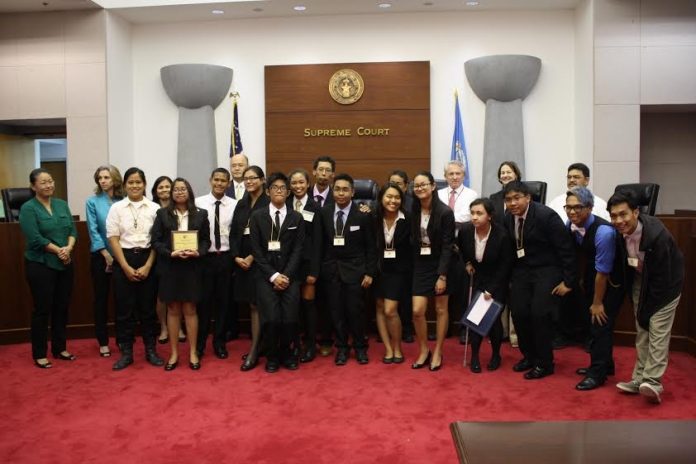 The NMI High School Mock Trial has existed for 18 years in our neighboring islands. It’s aim is to connect students to the legal profession.

The school’s student attorneys and witnesses went head to head with Marianas High School in an intense final round in a standing room only Supreme Court. MCS and MHS argued the fictitious case of Douglas v. Harrison as the defense and plaintiff, respectively.

The 12 member team will be the Commonwealth’s representatives at the national high school mock trial tilt in Boise, Idaho from May 12-14.

The students were coached by MCS president Galvin Deleon Guerrero and adjunct teacher Kevin Bautista as well as attorney Joseph L.G. Taijeron. Steven L. Hansen, a former judge for the Fourth Judicial District in Utah County, presided over the final round.

This year’s championship was the sixth for MCS. A total of six public and private schools from the islands competed this year. School president Guerrero, for his part, said that the team was “fortunate to go up against a team as good as MHS in the championship round because they brought out the best in our team.”

In his remarks Chief Justice Alexandro Castro lauded all the students, teacher coaches, and attorneys for their hard work and dedication. He emphasized that the winning team now represents the entire Commonwealth and not just their school.

Event officials explained that Mock Trial creates a bridge between the students and the legal profession and provides students firsthand experience with the judicial system.