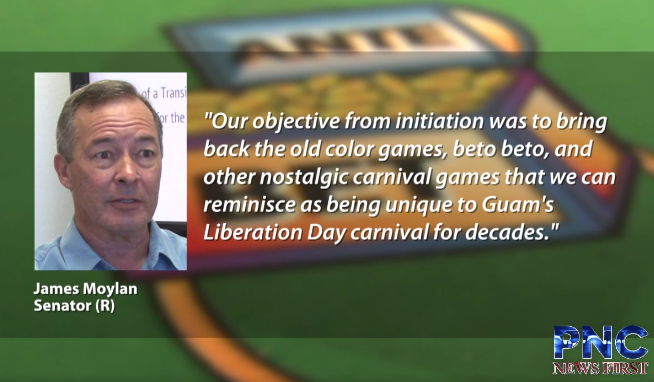 With a 50-50 chance of the governor signing the games-of-chance bill into law, the author clarified the legislation was never about opening a 24-hour, uncontrolled or off-site casino.

Sen. James Moylan’s Bill 29-35 seeks to authorize the Mayors Council of Guam to get the ball rolling on the rules and regulations of games-of-chance during Guam’s Liberation Festivities and other fairs.

Moylan said, “Our objective from initiation was to bring back the old color games, beto beto, and other nostalgic carnival games that we can reminisce as being unique to Guam’s Liberation Day carnival for decades.”

Moylan said, “The legislation further reiterates that any games-of-chance permitted shall be located at the Guam Island Fair and Liberation Day Carnival and not at an offsite location.”

But a statement from Angel Sablan, Mayor’s Council of Guam executive director, contradicts Moylan’s statement about the intent of the bill.

“Part of the rules may include having these card games outside, you know, have the vendor rent a place in Hagåtña or Tumon or somewhere vacant that can accommodate the number of players that will be coming to play the card games,” Sablan said.

“The smaller ones – the over and under, the beto beto the big or small, the colored game – that’s gonna stay and add some attractions to the carnival grounds itself,” Sablan said during an interview at Newstalk K57’s Mornings with Patti.

Sablan said the mayors’ council are deliberating on the provisions of the measure and discussing the rules and regulations with the Department of Revenue and Taxation.

Sablan said that they do not want to reinvent the wheel.  The mayors’ council is already looking at the regulations established prior to the enforcement of the gambling ban on Guam.

Moylan said, “Ultimately, whatever rules provided to the Legislature will be open for public comments and we look forward to the discussion.”