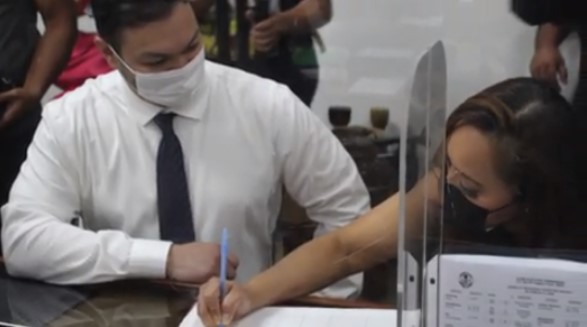 Another candidate for the gubernatorial election has picked up their packet today.

As PNC reported yesterday KUAM’s former news director confirmed her stepping down from her job to join San Nicolas this election season.

During the public announcement Congressman San Nicolas stated that for the last few months two candidates for the gubernatorial election have been announced and yet neither of them have talked about the people of Guam and the discussion of what’s gonna happen to the future of the island’s people. In which he adds that he was in search of a running mate who could help serve the people of Guam.

Rumor has it that San Nicholas approached multiple people to be his running mate, he chose Matanane.

Matanane adds that she knows that there will be personal attacks against her and her family due to the unfolding of the situation, She attributes that these attacks come from a negativity within the community.

Congressman San Nicolas is no stranger to criticism and negativity due to the many different situations he was put in. A question on whether or not the current ethics investigation would affect his candidacy for governor.

In his response he says that this investigation has been ongoing for years now and is still ongoing. The documents state that the process of the investigation is under confidentiality and we will respect the privacy of the process. It was not an issue during the last congressional race and it certainly shouldn’t be an issue in this election.

For Matanane the criticism she feels that she would receive is in regards to her qualification for political office.

In response to the newly announced candidacy Krystal Paco San Augustin the director of communications for the government of Guam states that our democracy empowers any eligible member of our community to run for elected office, and we look forward to productive and positive civic engagement.

The republican party of guam’s candidates Felix Camacho and Senator Tony Ada also respond with, we welcome the decision by guam delegate michael san nicolas and sabrina matanane to run for governor and lieutenant governor of guam. Voters will have an option for leadership at adelup. We look forward to the spirited campaign ahead.

During the process of picking up their gubernatorial packets both Congressman San Nicolas and Sabrina Matanane coined on the fly, Mike and Bre 2022.